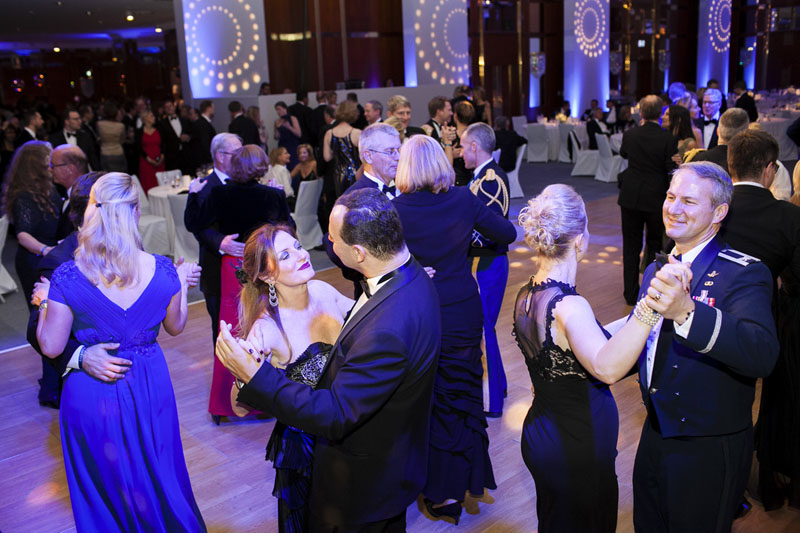 On November 20, the Atlantik-Brücke celebrated the transatlantic partnership with an Atlantik Ball. In her speech, Federal Minister of Defense Dr. Ursula von der Leyen, patron of the ball, reminded the guests of the Paris attacks of the previous Friday. She emphasized that the West will not let anyone take away its culture, its values and its way of life . Admiral Mark Ferguson, Commander of the U.S. Naval Forces Europe, the U.S. Naval Forces Africa and the Allied Joint Force Command Naples highlighted the unique and close bond between Germany and the United States. The 500 guests of the ball danced the night away to live music by the Glenn Miller Orchestra and tunes by DJ Noah Becker.

The John Goldsby Trio
John Goldsby has held the position of solo bassist with the Grammy Award-winning big band of Westdeutscher Rundfunk in Cologne since 1994. Before that, he lived and worked in New York City, being deeply rooted in the big apple jazz scene. Uli Kempendorff is a saxophonist and clarinetist from Berlin and can be heard on many music albums and on numerous radio broadcasts. Belgian jazz guitarist Jeanfrançois Prins has spent most of his adult life as a professional musician and has collaborated with many of today‘s jazz giants. Together, the John Goldsby Trio performs a unique medley of classical music and jazz.

DJ Noah Becker
Noah Becker, the oldest son of tennis legend Boris Becker and actress Barbara Becker, has gained popularity in the last few years with his fashion line Fancy, before becoming known for his music. He has enjoyed success behind the turntables as a professional DJ since 2012. During the last couple of summers, he has made waves in Ibiza‘s clubbing scene, among others at Ushuaia and Blue Marlin. He lives in Berlin, London and Miami.

The Atlantik Ball took place with the kind assistance of: