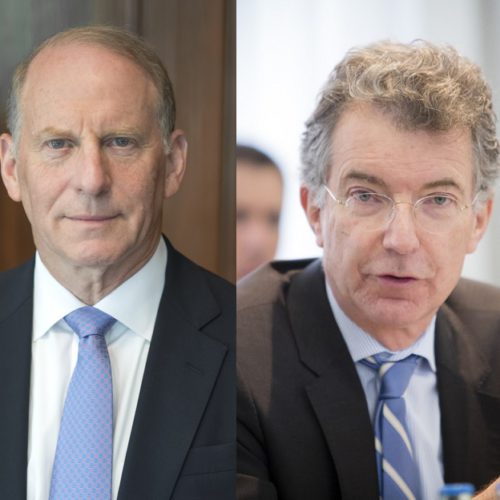 In conversation with Friedrich Merz, Chairman of Atlantik-Brücke, Christoph Heusgen and Richard Haass look back at some of the pivotal moments in the transatlantic relationship in 2017, and debate the fate of multilateralism in 2018 and beyond.

Ambassador Dr. Christoph Heusgen is the Permanent Representative of Germany to the United Nations. He has previously served as the foreign and security policy adviser to Chancellor Angela Merkel since 2005, and at the Council of the European Union from 1999 to 2005, including as the deputy general director and head of political staff for Javier Solana in the General Secretariat of the Council of the European Union in Brussels. Dr. Heusgen joined the German foreign service in 1980, and has held various positions there including deputy head of the EU policy unit in charge of the Maastricht Treaty, deputy head for EU affairs, and undersecretary for European Affairs.

Dr. Richard N. Haass is in his fifteenth year as president of the Council on Foreign Relations. Previously, he served as director of policy planning for the Department of State, where he was principal advisor to Secretary of State Colin Powell, US coordinator for policy toward the future of Afghanistan, and US envoy to the Northern Ireland peace process. He has extensive additional government experience. He has received the State Department’s Distinguished Honor Award and the Tipperary International Peace Award. Dr. Haass is a published author.

This event is for members and Young Leaders Alumni of Atlantik-Brücke as well as for selected guests. For registration please login.
Login