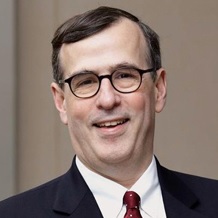 “Why Internationalism Is Crumbling”

America is redefining its role in the world under the Trump presidency, and in Europe, too, the liberal international order is being challenged by new political parties previously on the fringes. Why do we see this desire to undo foundational aspects of Western foreign policy on both sides of the Atlantic? And what is the connection between populism’s rise and the growing anti-establishment trend? Frank Lavin will discuss the distinctive features of political populism, how it gave rise to the Trump presidency, and what this entails for Western foreign policy and the future of internationalism.

Frank Lavin served in various positions at the White House, National Security Council, State Department, and Commerce Department during the Reagan, Bush Sr., and Bush Jr. Administrations. From 2005 to 2007, he was Undersecretary of International Trade at the U.S. Department of Commerce. Today, he is the Chairman and CEO of Export Now, an American firm that operates e-commerce stores in China for international brands. Frank Lavin is a 1994 Young Leader Alumnus of Atlantik-Bruecke.