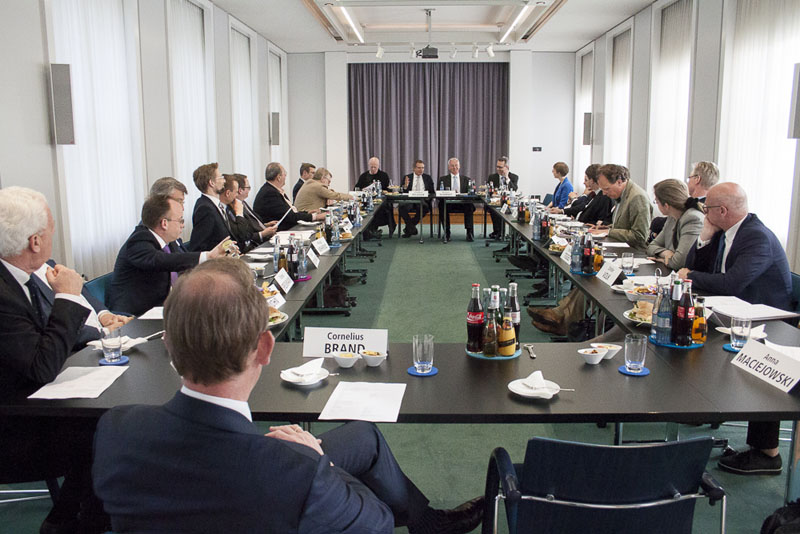 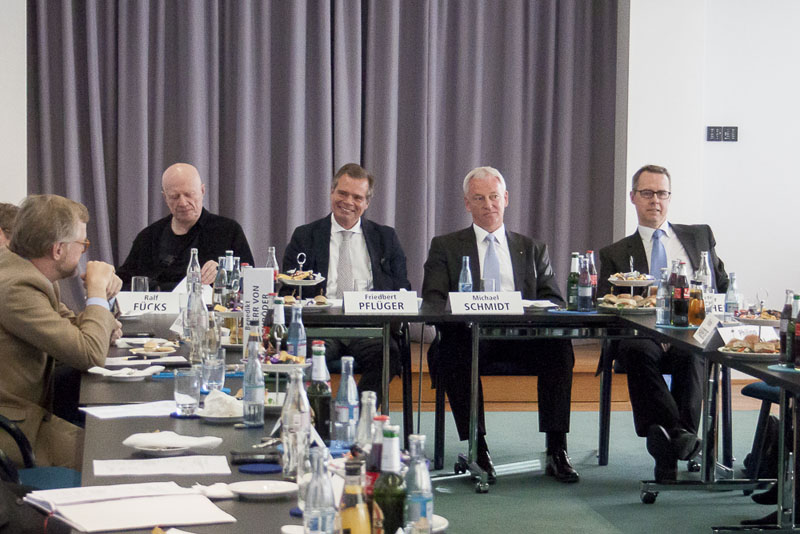 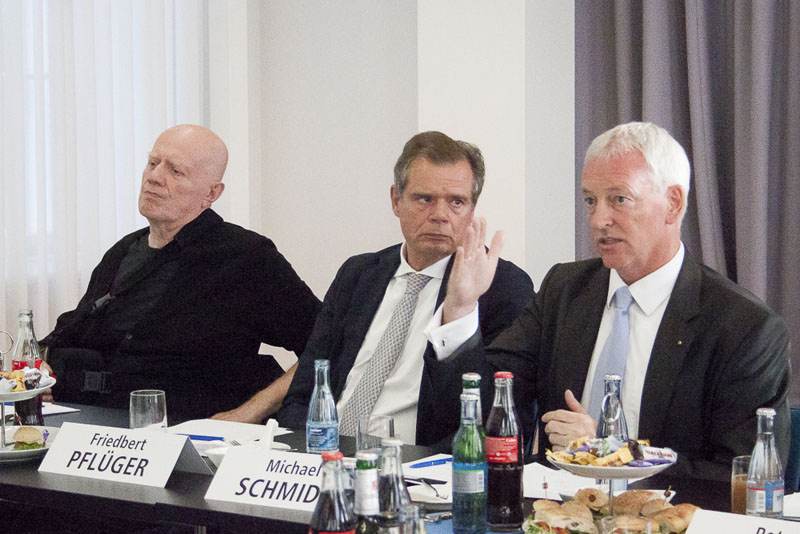 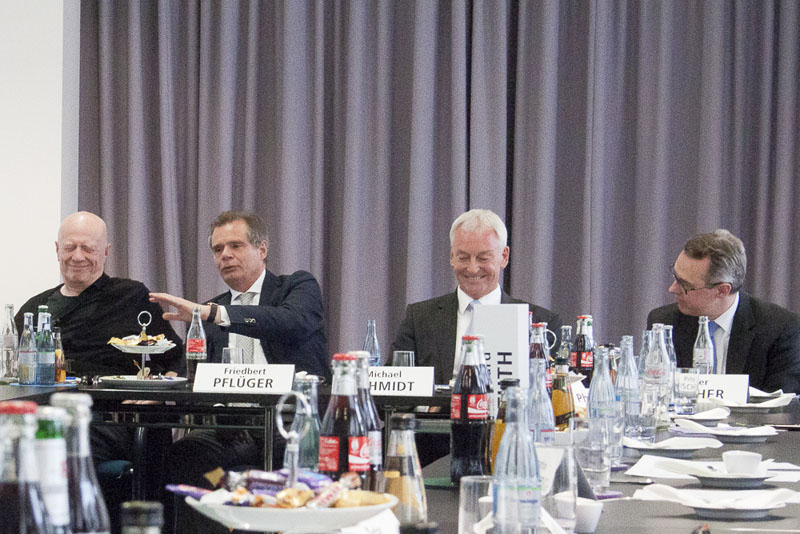 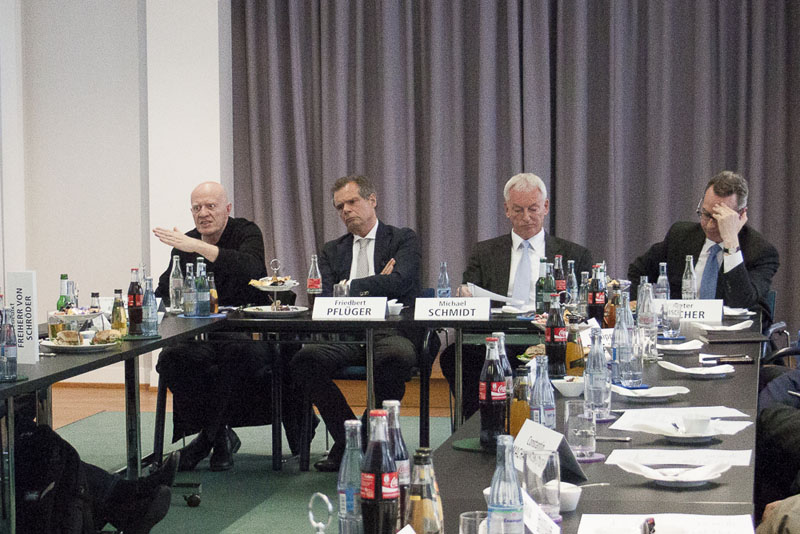 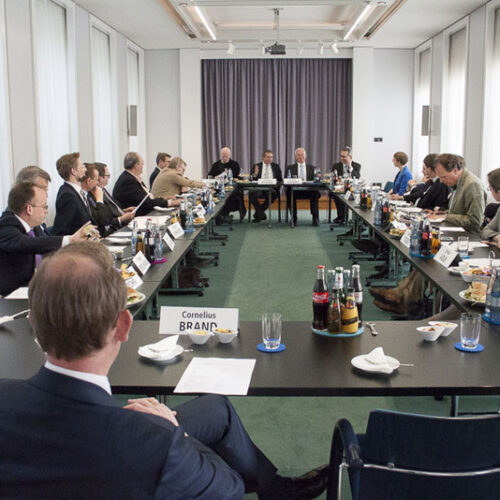 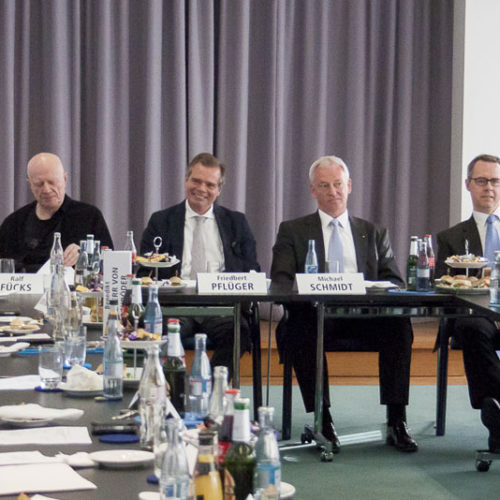 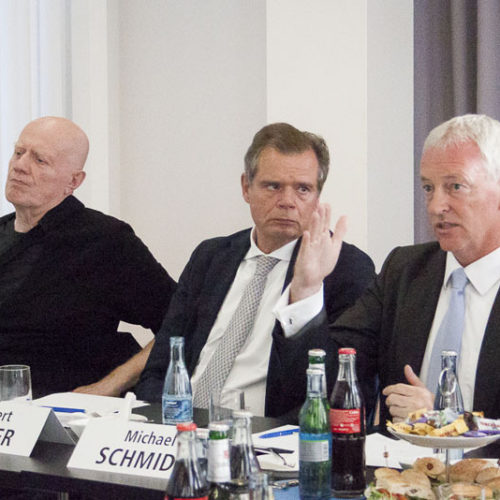 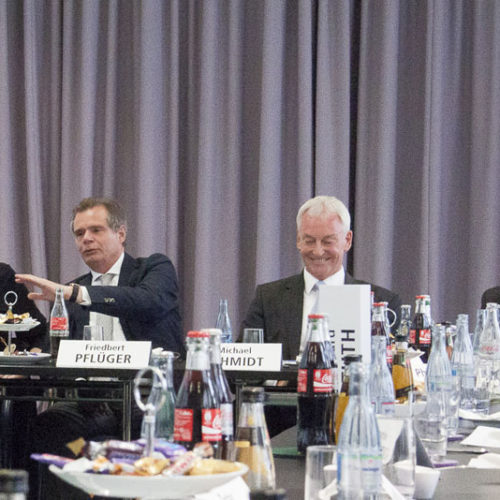 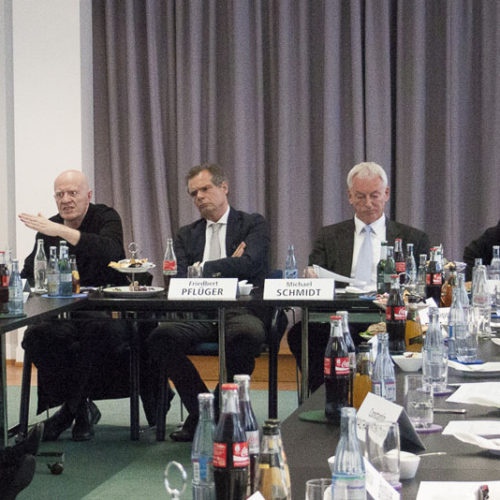 On the evening of Monday, May 11, 2015, Atlantik-Brueckes’s Foreign and Security Policy working group met to discuss »Geopolitics of Falling Oil Prices: Opportunities and Challenges for Germany and Europe«. The invited speakers were Michael Schmidt, Chairman of the Executive Board of BP Europa SE and Board Chairman of the Association of the German Petroleum Industry (MWV), Ralf Fücks, Chairman of the Heinrich-Böll-Stiftung, as well as Peter Fischer, Deputy Director General for Globalisation, Energy and Climate Policy at the German Federal Foreign Office. The discussion was moderated by Professor Dr. Friedbert Pflüger, Managing Director of Pflüger International GmbH and Director of the European Centre of Energy and Resource Security (EUCERS) at King’s College London.

Friedbert Pflüger started off the discussion by giving an overview on current geopolitical implications arising through the low oil price.

Michael Schmidt was the next in line to speak. From an oil industry point of view he stressed that the oil price has always been subject to natural fluctuations of the market. The current low price, he said, is mainly caused by the United States’ increase in shale oil and gas production, which does not only result in a short-term oversupply but also in a substantial extension of the “Oil Age”. “The USA will not let themselves be driven out of their beneficial position,” Schmidt added. He also pointed out how the growing global need for energy, especially in emerging countries, will render a decreasing demand and the reduction of oil production highly unlikely. In his opinion, one cannot afford to discriminate against any form of energy, no matter if from a fossil or a renewable origin.

Peter Fischer offered his foreign policy point of view and brought attention to the importance of oil exports in political conflicts. The economic sanctions on Russia and Iran have only been so successful due to the low oil price, he said. Fischer also mentioned that the ongoing oil production in Saudi Arabia and the United States has disclosed those countries’ high dependence on their oil resources. Moreover, he noticed the fact that a new political environment has been developing in terms of climate change which has been benefitting the development of renewables. These new energy politics, however, were not influenced by the low oil price, but constitute a specific challenge for the global energy sector. While Fischer considered the low oil price a “stimulus package” for Germany and the EU, he also acknowledged the problematic economic consequences the current price situation has on oil export-dependent countries, such as Venezuela, Iraq, and Nigeria.

Ralf Fücks laid emphasis on the consequences the oil price and -production has been exerting on the global energy transition. He sees industrial nations under an increasing pressure to act. Business as usual in the field of energy policy is no longer tenable, he remarked. Fücks added that energy security and independence of the European Union are only to be achieved by closer energy related networking among its member states. The EU would therefore have to open up towards innovative opportunities for renewable energy production. He stressed that in light of the development towards a situation of “peak demand” instead of “peak oil”, the connection of energy consumption and economic growth has begun to dissolve.

The largest debate issue of the evening was in how far future energy supply will rely on further oil production. While Peter Fischer and Ralf Fücks held on to their view that demand for fossil based energy will decrease, both Michael Schmidt and Friedbert Pflüger stated that a peak demand will only be reached when the oil sources run dry in a few decades. There was broad consensus on approving a political energy union within the European Union. To different extents, the discussants agreed on the increasing role of renewable energy sources for confronting climate change as effectively as possible and for ensuring a secure energy supply.

In the following Q and A session the planning uncertainties of small and medium sized companies, caused by the high volatility of the oil price as well as in-transparent energy politics, were discussed.