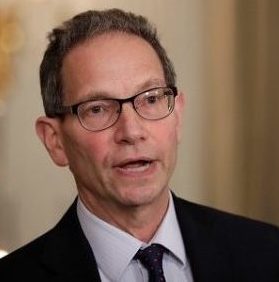 On November 6, the citizens of the United States of America elect all of the 435 seats of the House of Representatives and one third of the Senate’s seats. Will the Democratic Party succeed in regaining one of the chambers from the Republicans? What is the current state of Congress, especially with bipartisanship in crisis? Which are the most important legislative projects both for Republicans and Democrats over the next two years until the presidential election in 2020? We look forward to discussing these questions with Charles Kupchan. He is Professor of International Affairs in the School of Foreign Service at Georgetown University and a Senior Fellow at the Council on Foreign Relations. From 2014 to 2017, he served as Special Assistant to the President and Senior Director for European Affairs on the National Security Council in the Obama White House.

Daniel Pontzen is a correspondent in the Berlin office of ZDF German TV. He is responsible for the coverage on foreign and European policy as well as on the CDU/CSU. Prior to his engagement in the German capital, Daniel Pontzen was a correspondent in the ZDF Washington studio covering North and Central America. He earned his diploma in journalism at the Ludwig Maximilian University in Munich and obtained a doctorate in Political Science at the University of Freiburg. He is a 2014 Young Leader Alumnus of Atlantik-Bruecke.