“Russia is aggressive, Europe apathetic – and the US absent” 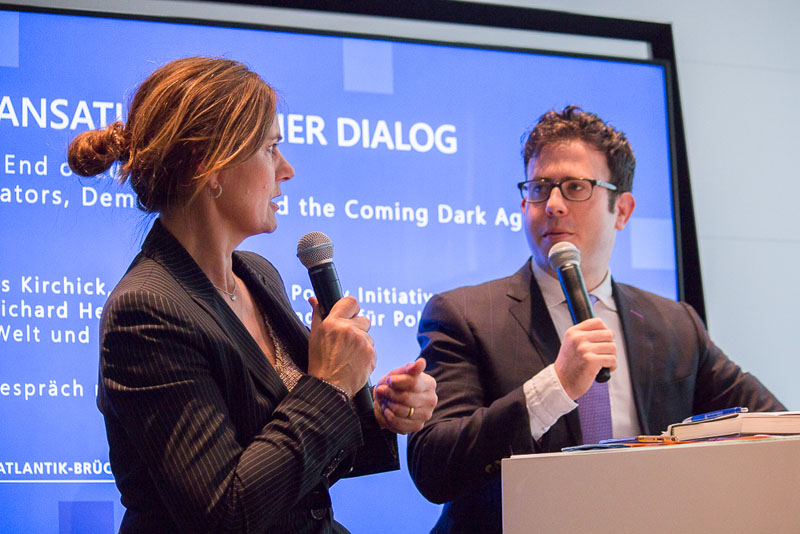 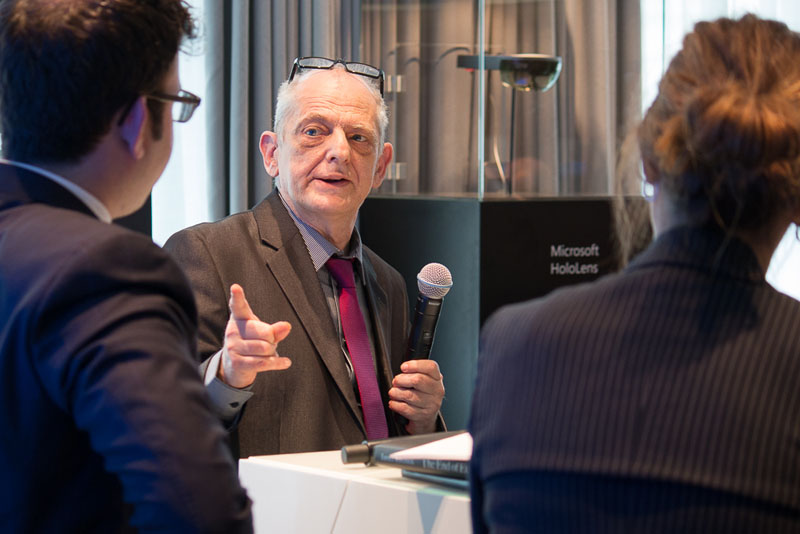 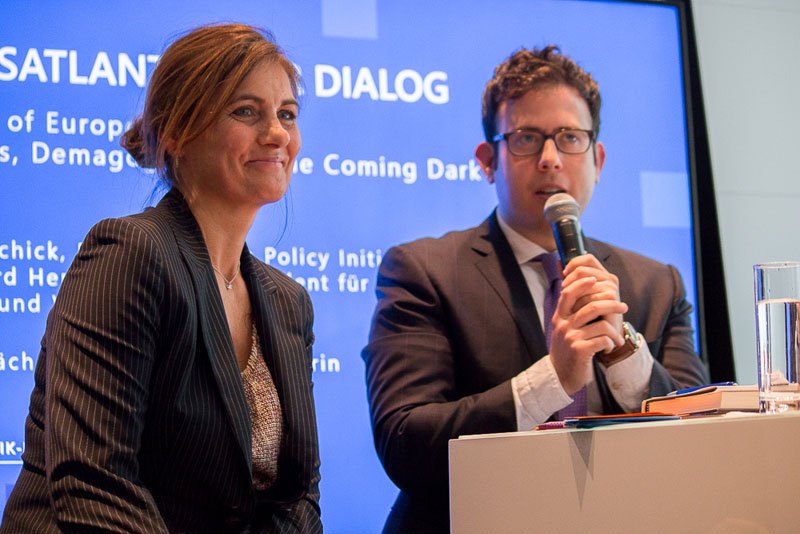 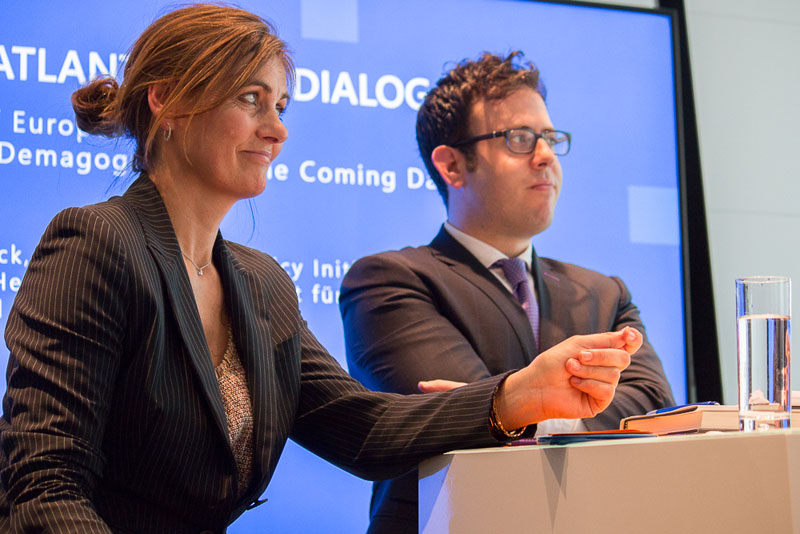 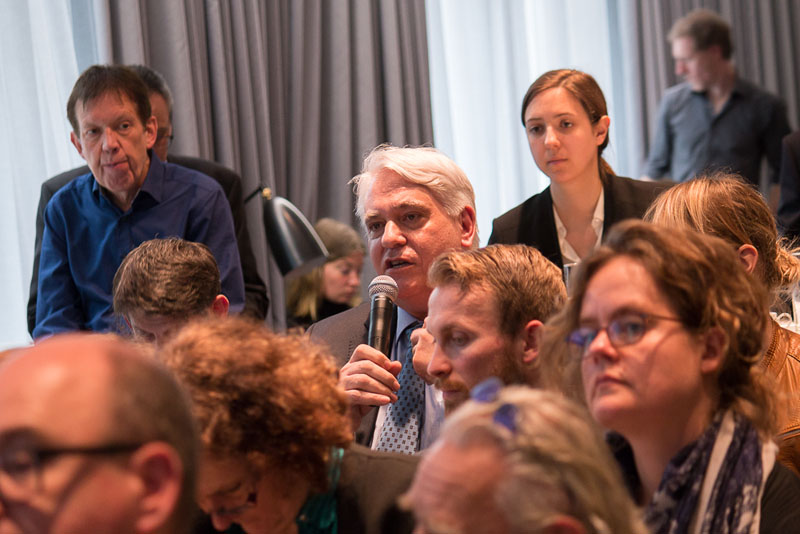 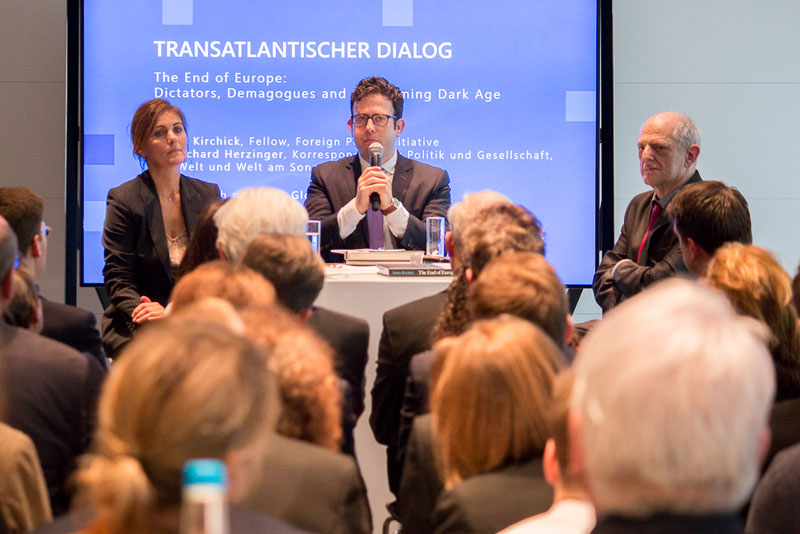 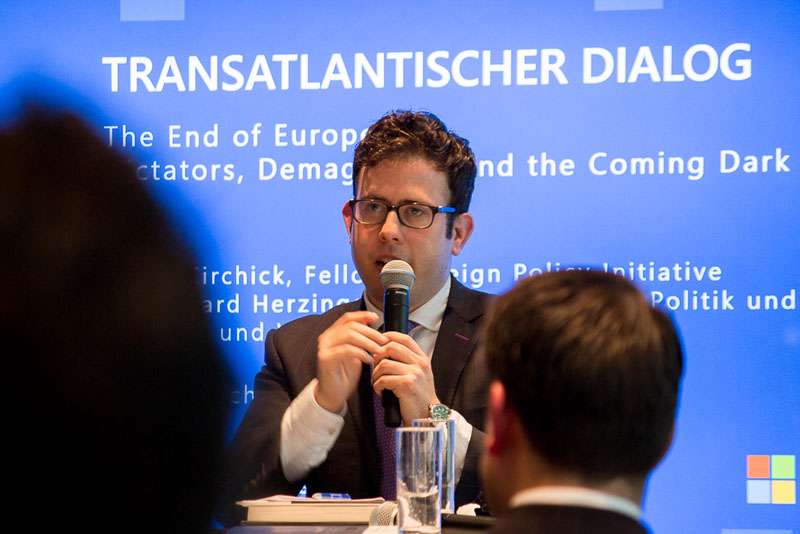 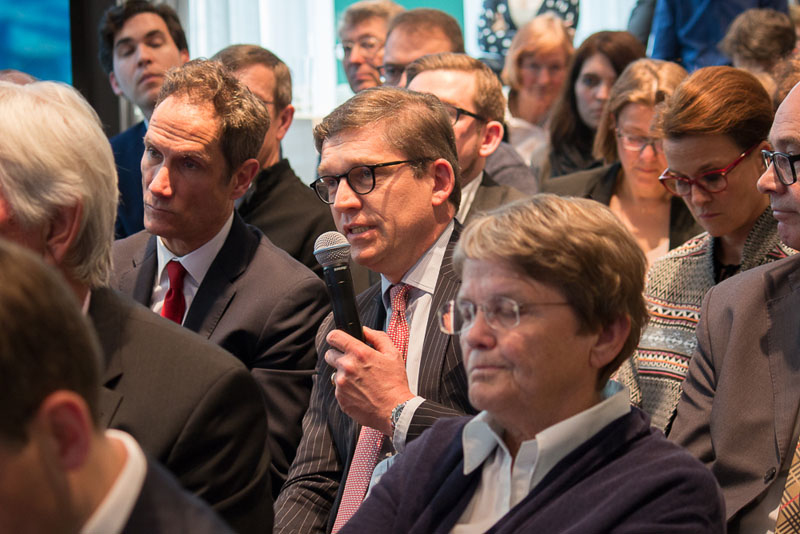 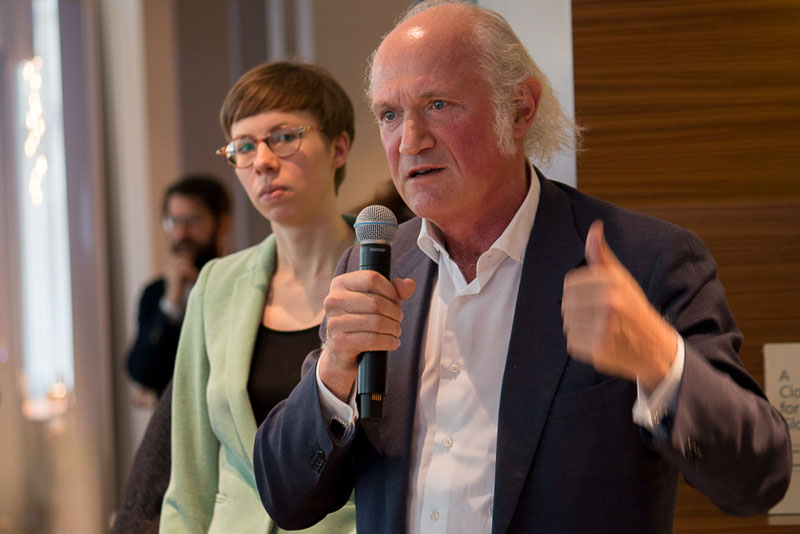 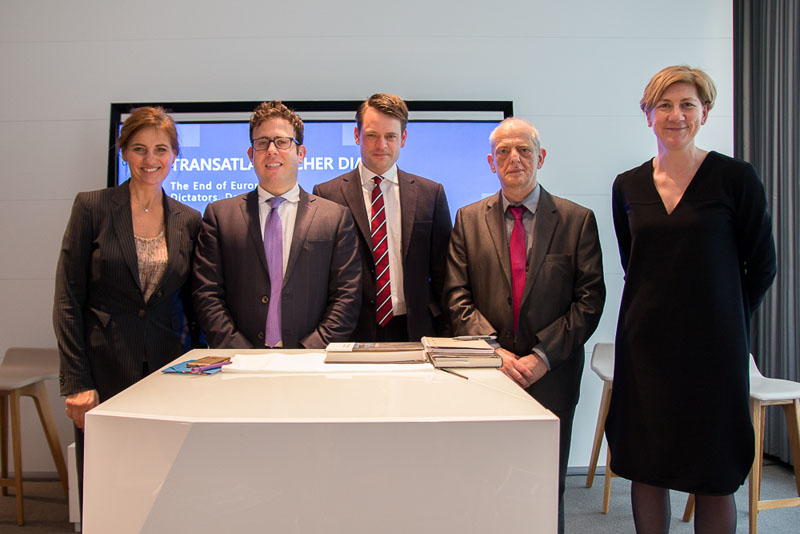 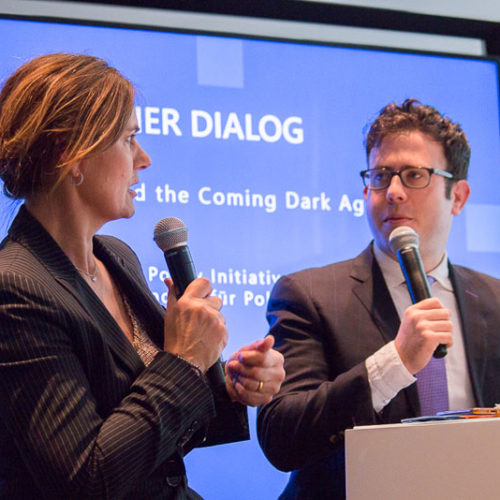 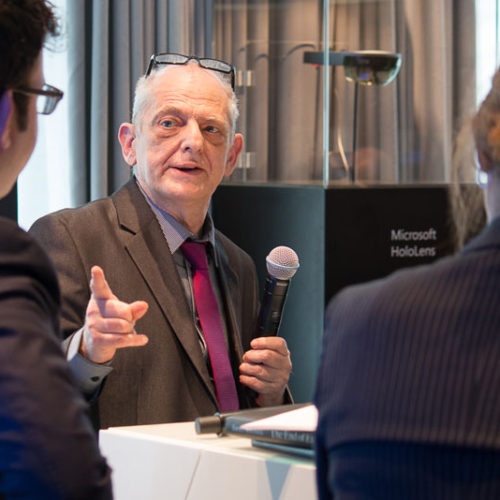 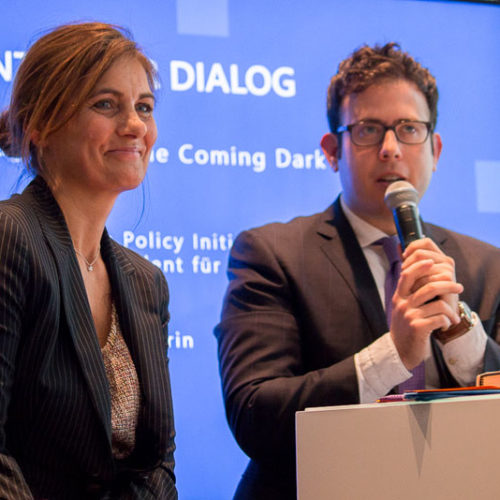 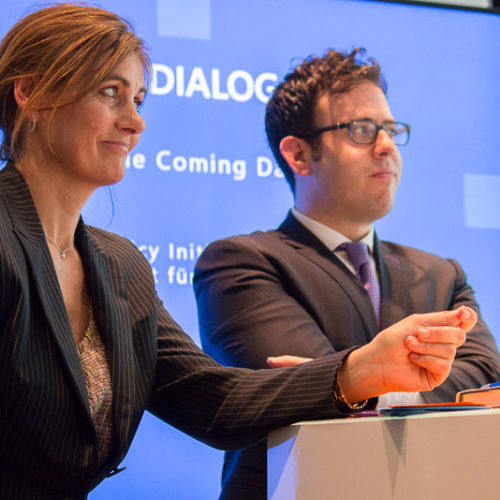 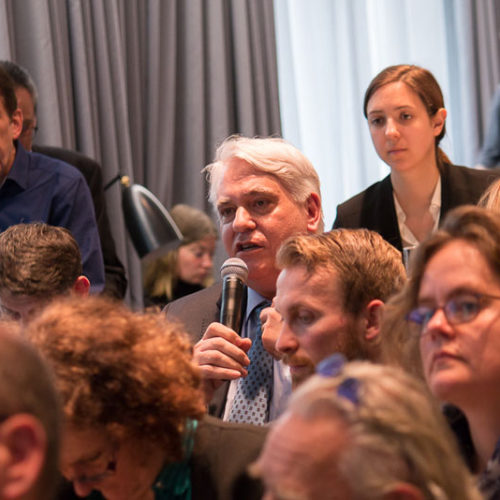 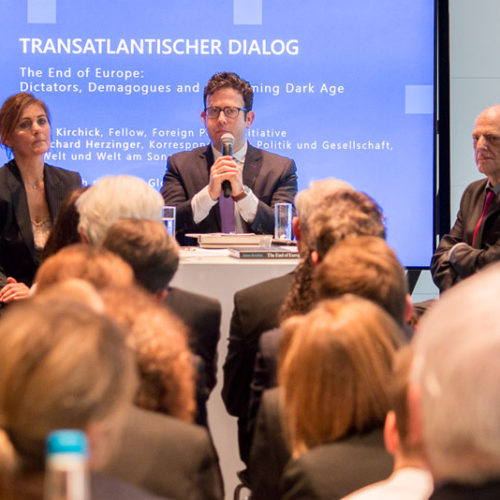 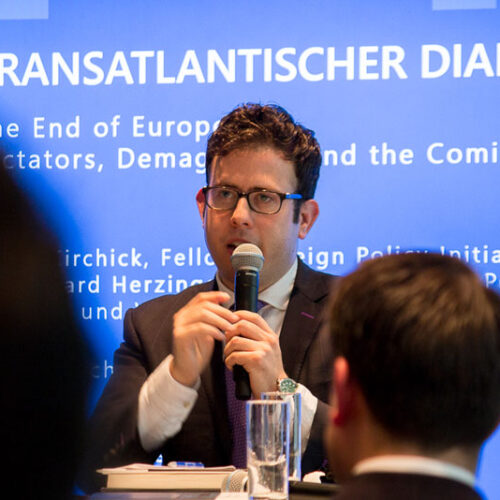 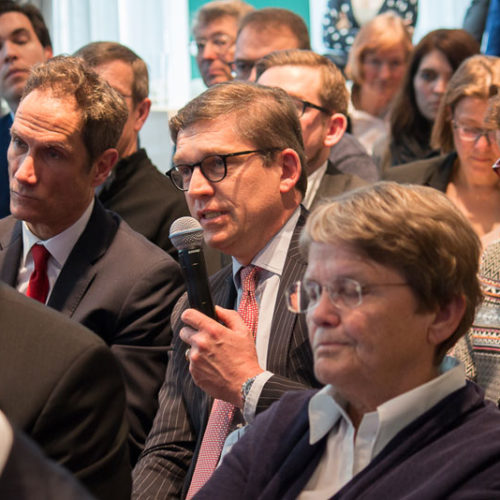 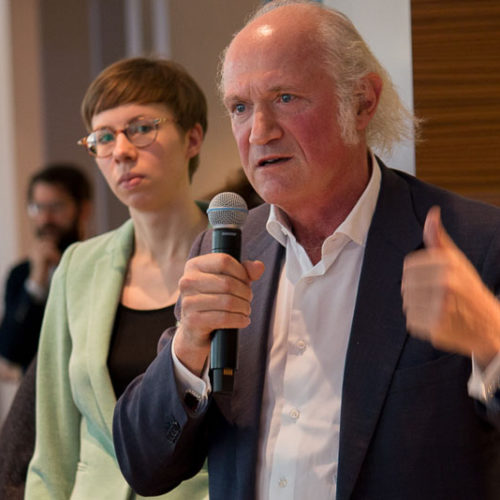 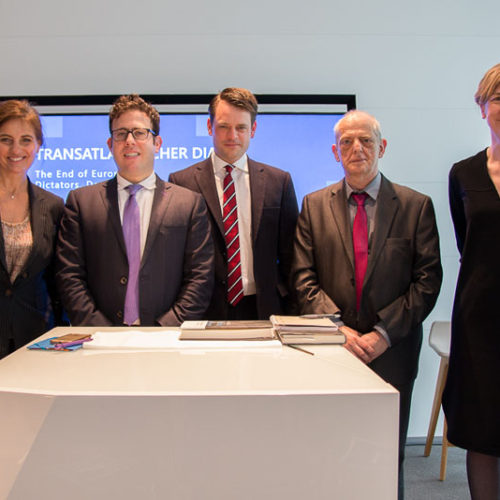 When an American journalist and Young Leader alumnus of Atlantik-Brücke pens a book entitled “The End of Europe”, there’s clearly a pressing item on the transatlantic agenda. It was no surprise, then, that around 60 members and guests gathered in Berlin to hear James Kirchick discuss his newest book with Dr. Richard Herzinger, politics and society correspondent of the daily DIE WELT.

What was surprising, however, was that Kirchick, an author and fellow at the center-right Washington, D.C. think tank Foreign Policy Initiative, started his remarks to the audience and moderator Katja Gloger, editor at large at STERN, by stating: “I’ve written a pro-European book.” It is about a crisis of the old continent’s values, Kirchick said. Speaking one day after the United Kingdom’s official application to leave the European Union, Kirchick explained that several member states no longer represented the values of the bloc and violated the commonly agreed set of rules. Hungary and Poland were named as examples.

“Russia is aggressive, Europe is apathetic – and the US absent.” This is how the author summarized the core thesis of his recently published book. Russia is, according to Kirchick, boosting its military budget while perfecting the art of hybrid warfare. On top of that, the Kremlin led by Vladimir Putin considers Chancellor Angela Merkel public enemy number one because she is the mostly likely leader to unite the West. “There is a high probability that there will be a cyber-attack on the German federal election,” Kirchick warned.

Brexit could not have come at a worse time for Europe, Kirchick went on to say. Demographic pressures as well as dismal economic growth has eroded trust in European societies and fueled the rise of populist movements and growing resentments towards foreigners in face of the refugee challenge.

Kirchick offered plenty of criticism of his own country as well. President Donald Trump is “hostile towards the European idea” and publicly advocated for Britain’s withdrawal from the EU. Fundamentally, the 45th US president fails to grasp NATO’s basic premise, Kirchick explained: “You can’t attach a price tag to the value of the protection and security of Europe.” Trump‘s election has reinvigorated NATO’s long-standing burden-sharing debate. According to Kirchick, the president can cause considerable damage internationally, especially through his inaction. Specifically, Trump’s calling into question of the collective defense clause in Article 5 of the NATO Treaty poses a grave risk, the author said.

A plea for strength and unity

At this point in the discussion, Dr. Richard Herzinger suggested that “The End of the West” would have been a more fitting title for the book, given the nationalistic and isolationist tendencies that can been observed in the United States. In the eyes of the WELT correspondent, there is a glimmer of hope for Europe’s future despite recent developments on both sides of the Atlantic. On the one hand, anti-American sentiment is on the rise across Europe. In Germany in particular, this anti-Americanism is highly irrational because the federal republic is the country that has benefitted most from America’s preeminence since post-World War II. “On the other hand, many citizens are becoming aware of the value of the Western alliance that must be defended,” Herzinger said. The key question for him is whether the West is able to stand its ground against the new authoritarianism. In this context, Herzinger accused European politicians of fundamentally misunderstanding Putin and Russia. The Russian president is already pursuing “hot wars in the Ukraine and Syria”. The only way to counter this is with unified strength – both in foreign and security policy as well as economically.

Not all hope is lost for Europe and the United States, even for Kirchick. Rather, he called on the transatlantic partners to stand up for the shared principles they have built up over more than 70 years. Constant and tireless efforts are required to raise awareness of the strengths of the liberal world order. “Angela Merkel is the most experienced politician of the West and the free world,” Kirchick said. Yet even she will not be able to solve this difficult task alone.

The Transatlantic Dialog is a cooperation of Atlantik-Brücke with Microsoft Germany.