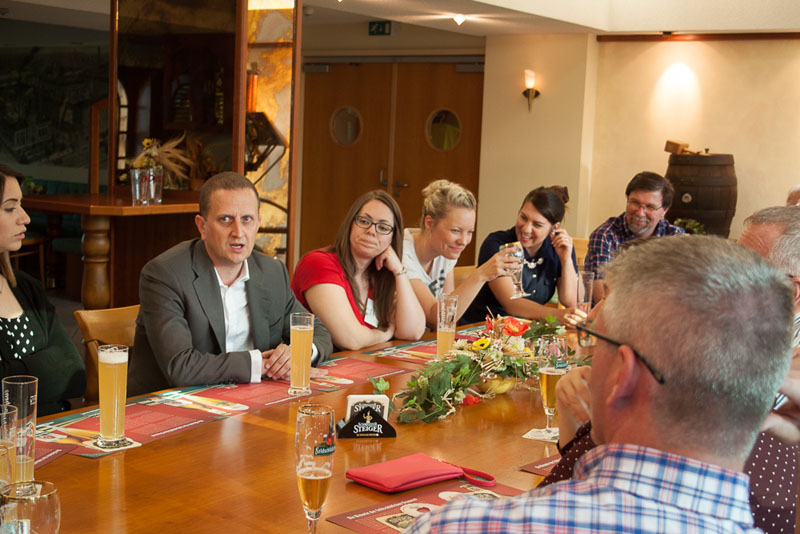 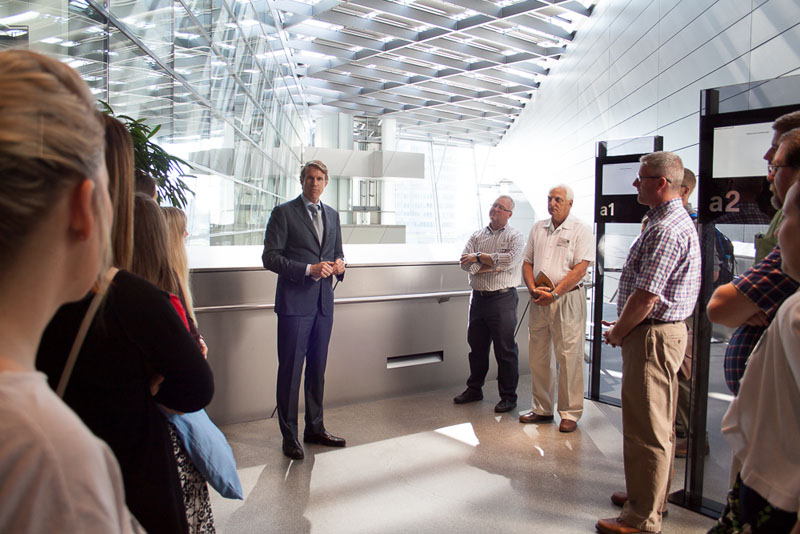 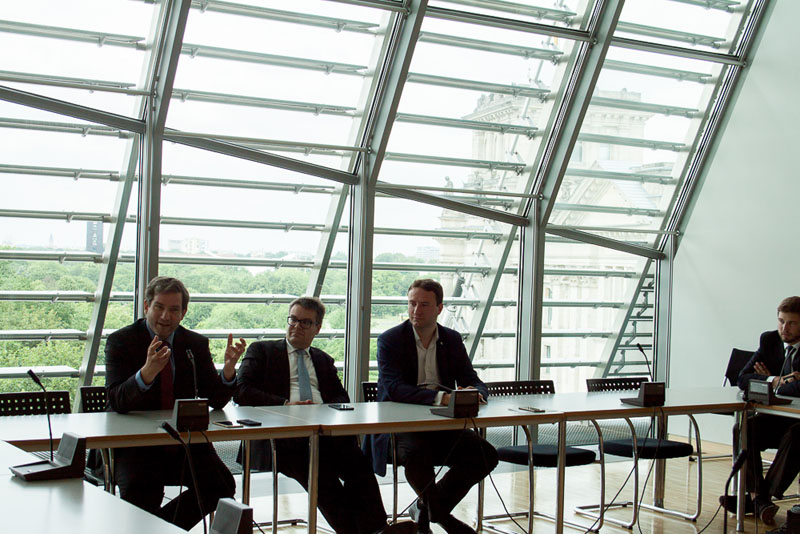 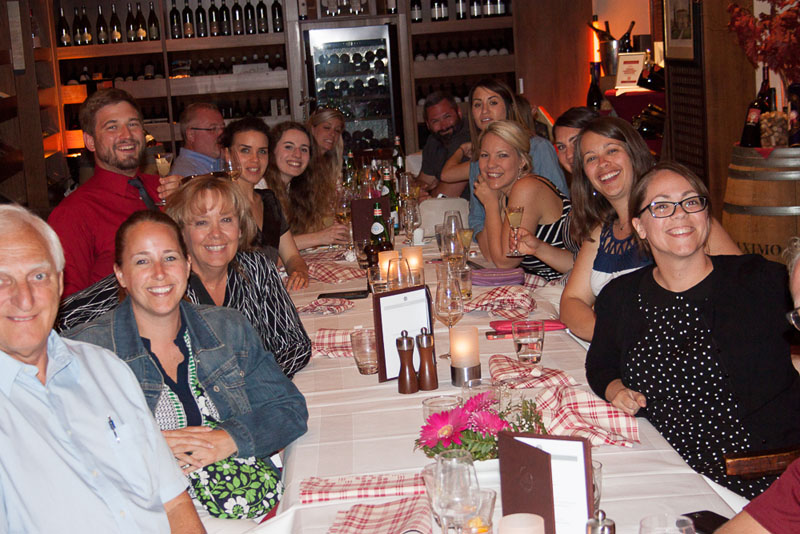 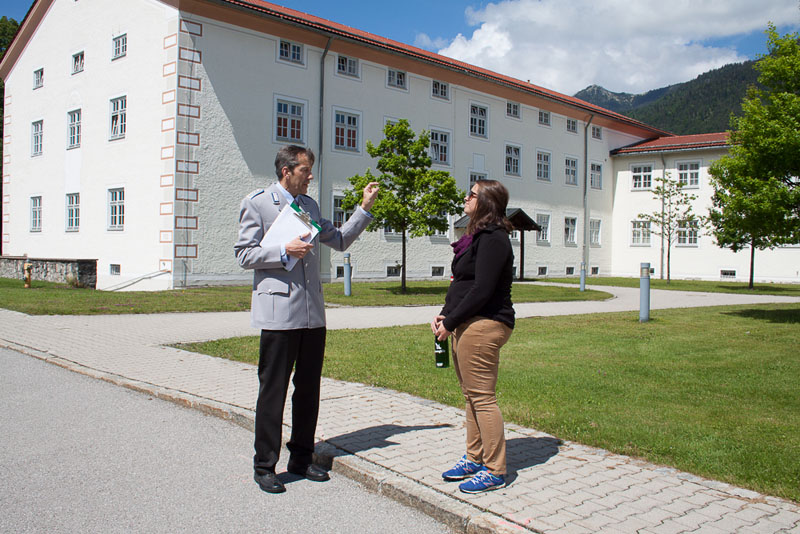 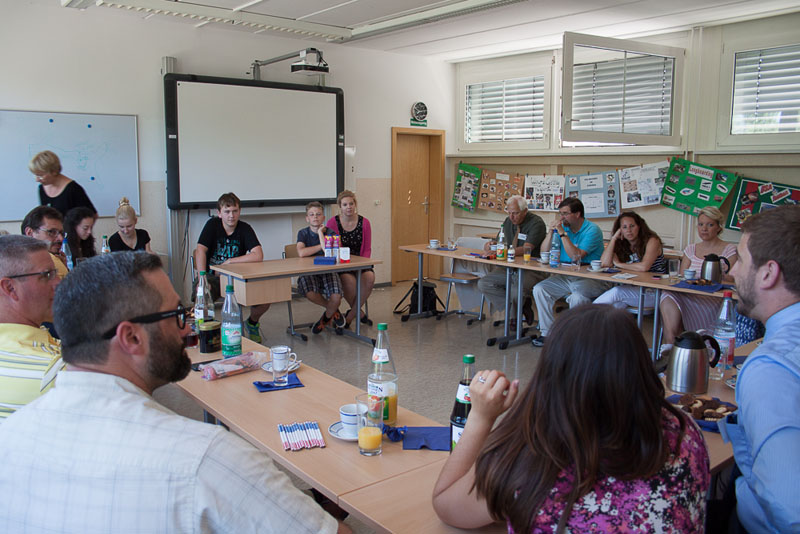 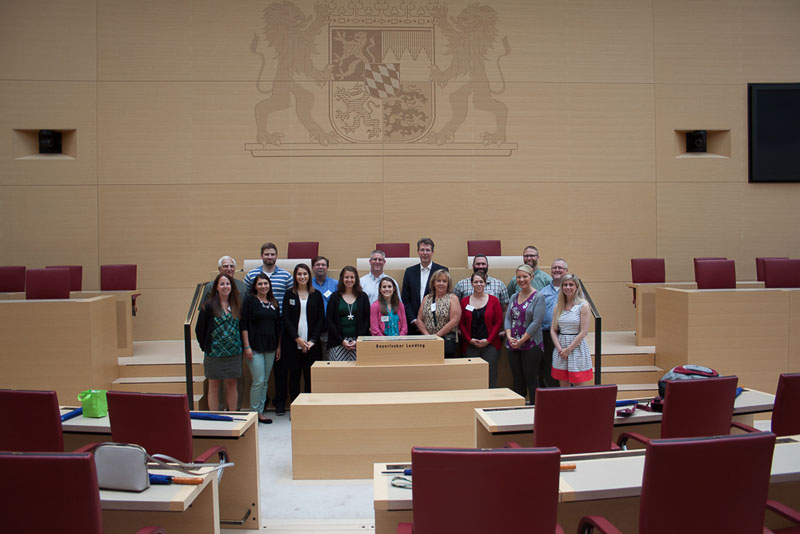 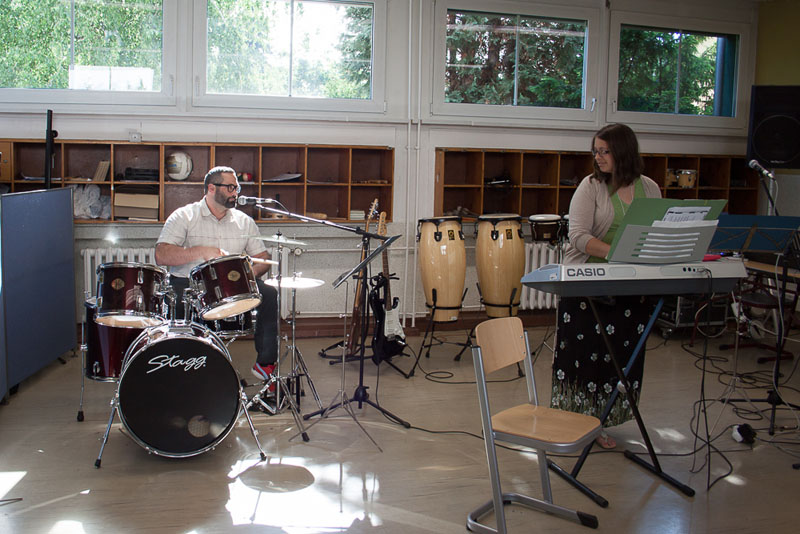 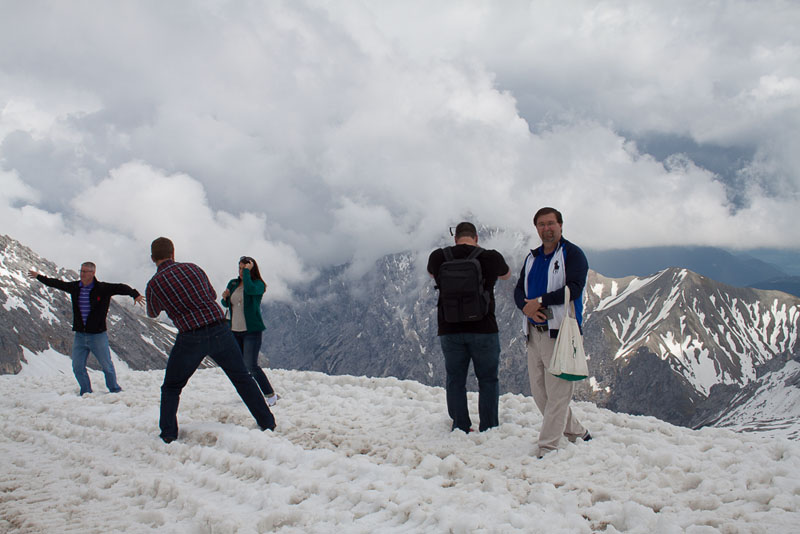 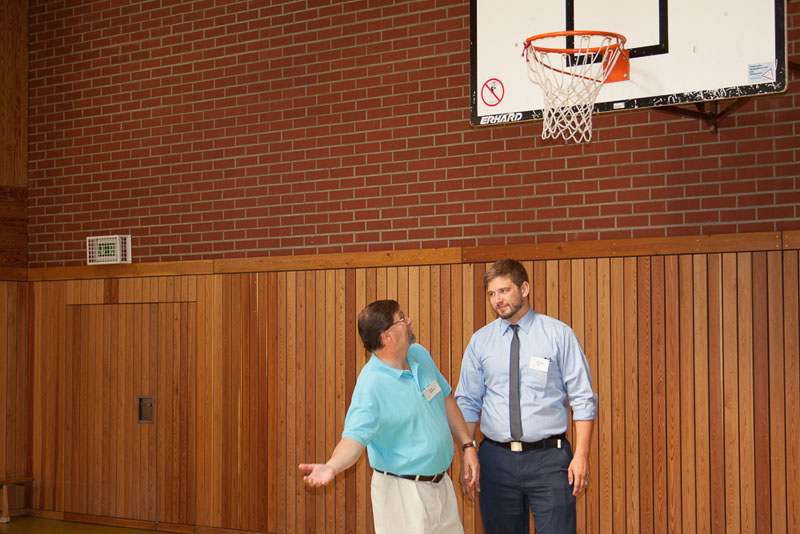 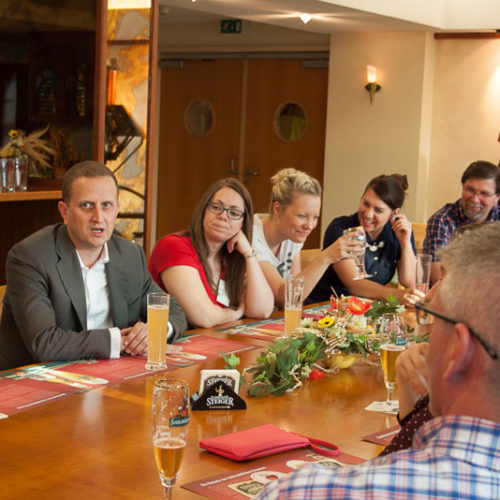 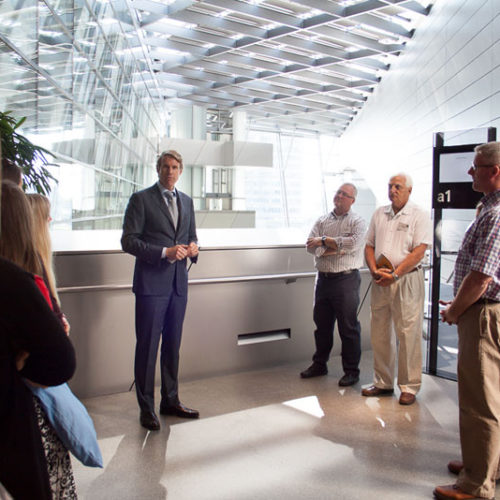 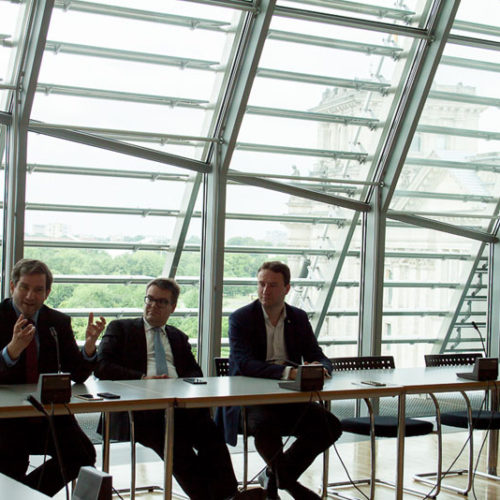 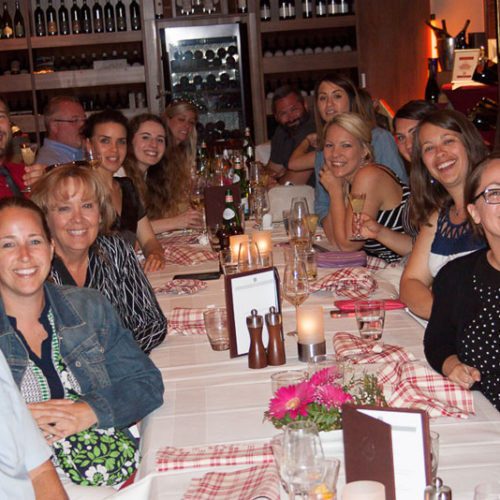 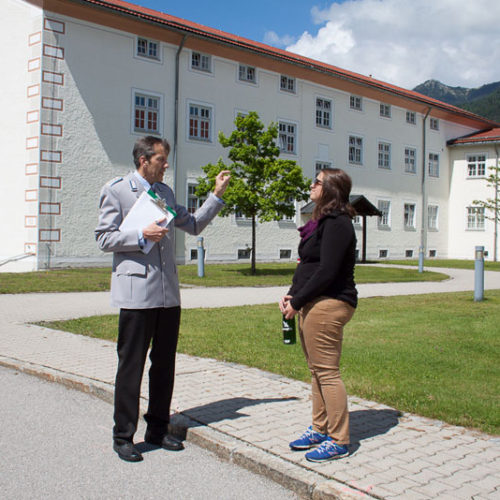 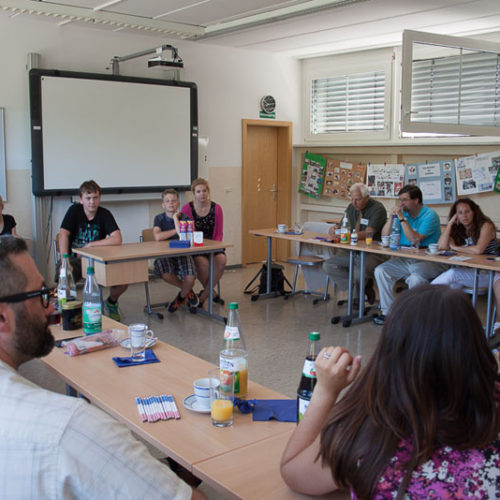 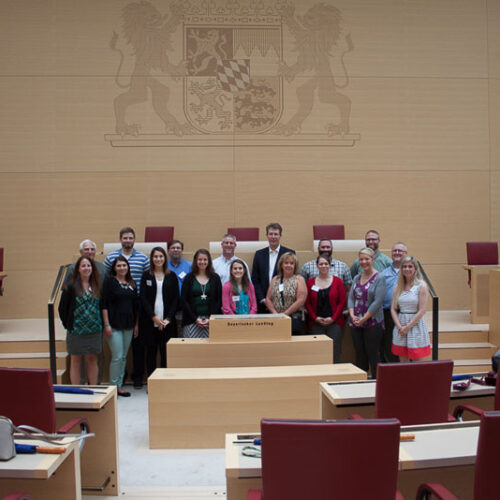 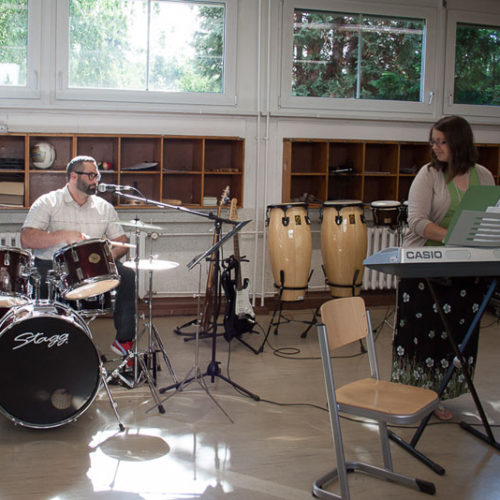 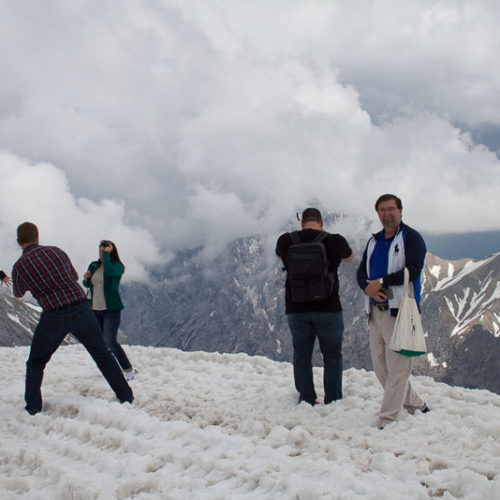 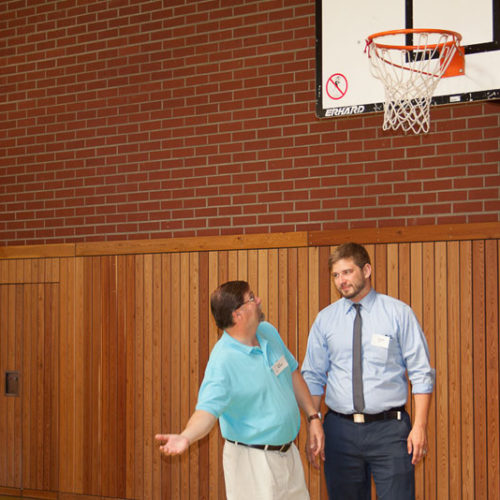 „It will take me the rest of the summer to process and fully understand the impact upon my teaching.” Kristin Schnerer, World Studies teacher, Start High School, Toledo, Ohio

Fifteen American social studies and history teachers participated in this year’s study trip to Germany. From June 5-12, the teachers from Ohio travelled from Munich and Garmisch-Partenkirchen to Dresden and Berlin. The study trip’s itinerary included visits to schools and companies as well as meetings with representatives from politics, the media, and think tanks to promote discussion and the exchange of ideas.

Just like in the past, many of Atlantik-Brücke’s members and Young Leaders Alumni contributed to this year’s study trip program. Young Leaders Alumni Carsten von der Linden and Roman Deininger guided the teachers on a city tour exploring Munich. Markus Blume, Member of the Bavarian State Parliament (CSU), welcomed the group of teachers to the Bavarian State Parliament. After a tour of the historical building, he provided interesting insights into German politics on state level.

The study trip also included a visit to the George C. Marshall Center, a European Center for Security Studies located in Garmisch-Partenkirchen. It was the highlight of the week for many of the participants. Director Keith W. Dayton and Dr. Robert Brannon, Dean of the College of International and Security Studies, introduced the group to the Center’s different programs and discussed current issues in security and foreign policy with the teachers. After this, the group visited Germany’s highest mountain, the Zugspitze, which allowed the teachers to be in two countries at the same time: with one leg in Germany and one leg in Austria, the trip to the Zugspitze offered an exciting experience.

At the BMW Welt in Munich, the group was introduced to the various vocational training opportunities offered by BMW and gained insight into the company’s products and marketing strategies. The teachers spent the evening in Dresden with Atlantik-Brücke board member Karsten Uhlmann. He invited them to his brewery, the Feldschlößchen Brauerei, where they enjoyed a traditional German “Abendbrot” (a light supper). Uhlmann shared his experiences living in the GDR and ofthe fall of the Berlin Wall. This offered the teachers a new perspective on an important part of German history.

The teachers were very interested to learn more about the German school system and its differences to the American system. At the Oberschule (Highschool) Cossebaude in Dresden they joined classes and met 8th graders. Some teachers, who were able to witness the integration of young refugees into German classes, were particularly impressed. Lainie Keper from Islander Middle School described her visit as „incredibly powerful“ and pledged: „I will advocate for my school to act in the refugee crisis.”

The teachers spent a historic afternoon in Dresden and took a tour of the Frauenkirche with Reverend Sebastian Feydt before they headed to the Sächsische Landeszentrale für politische Bildung (State Agency for Civic Education of Saxony). The Center’s director Frank Richter did not only offer an overview of the goals and methods of his institution but also impressed the teachers with his personal history of the German reunification and his recommendations for social studies lessons. For Kayeann Batanian, a teacher from Swanton Middle, this discussion was certainly one of the trip’s highlights: „Everything he said I am going to focus on with my 7th graders.“

Atlantik-Brücke’s Young Leaders Alumni and members also contributed to the Berlin section of the trip. The teachers participated in a lively discussion about freedom of speech and populism with Members of the Bundestag Metin Hakverdi (SPD), Tobias Lindner (Alliance90/The Greens), and Mark Hauptmann (CDU/CSU). The upcoming presidential election in the United States was a major topic as well. After the discussion, the teachers had a lunch discussion with Jürgen Hardt, Member of the Bundestag (CDU/CSU), and coordinator for transatlantic cooperation, at the International Club of the German Federal Foreign Office. They discussed the importance of transatlantic cooperation and the necessity to promote open communication given the increasing complexity of international conflicts. An event at the Magnus Haus provided insights into the refugee crisis. Sebastian Muschter, acting president of the LaGeSo, Juliane Schäuble from the newspaper Tagesspiegel, as well as  Joachim Jäger and Mario Geiger from the German Red Cross discussed their experiences of how the refugee crisis is being handled in Germany. The role of the media and its impact on public opinion in Germany and the United States was of particular interest at this event.

German history certainly played an important role during the study trip. The teachers visited theBerlin Wall memorial, where they gained insights and took pictures to use in the classroom. Carrie Lockhart, a teacher at Otsego Junior High School, summarized: „I have so many historical references and pictures to take back home.“ The group’s visit to the museum and Memorial Sachsenhausen was a very moving part of the program which created lasting and unique memories and insights into this period of German history. Kristin Schnerer from Toledo’s Start High School has captured this in a single sentence: „Sachsenhausen – being there, where truly horrible things happened, will fundamentally change how I discuss the Holocaust.”

A festive dinner in Berlin marked the end of the 2016 study trip for the group of American social studies teachers. On Sunday morning, they headed back to the United States. While the farewell was “bittersweet”, the teachers were very eager and excited to share their experiences with their friends, families, and especially their students. Andrew Carr from Swinton High School concluded: “The people I’ve met here have shown me that it’s ok to be more open and direct with my students, even about politics. “