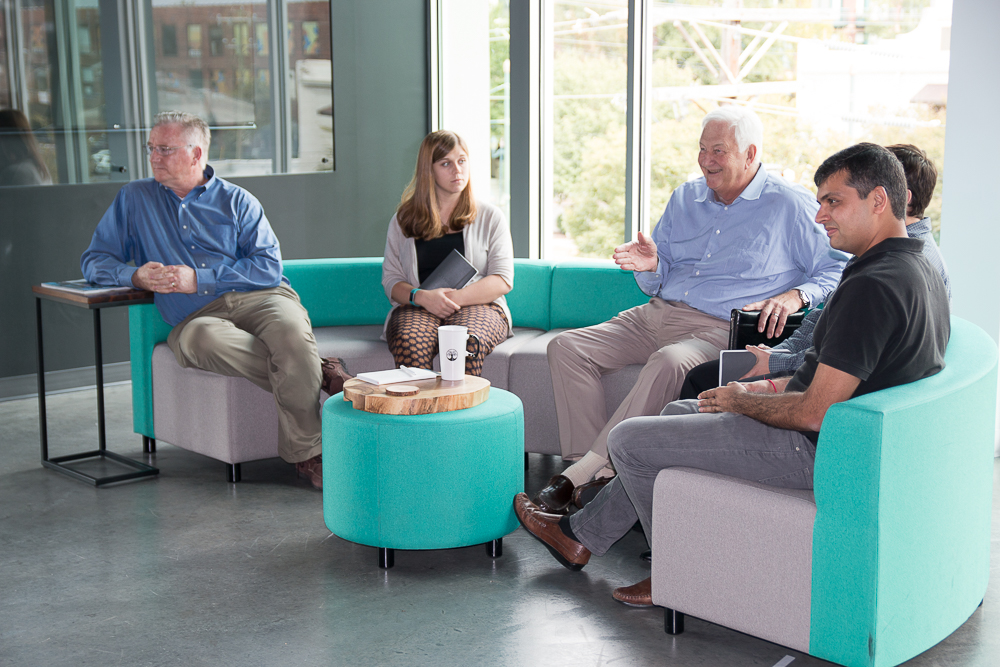 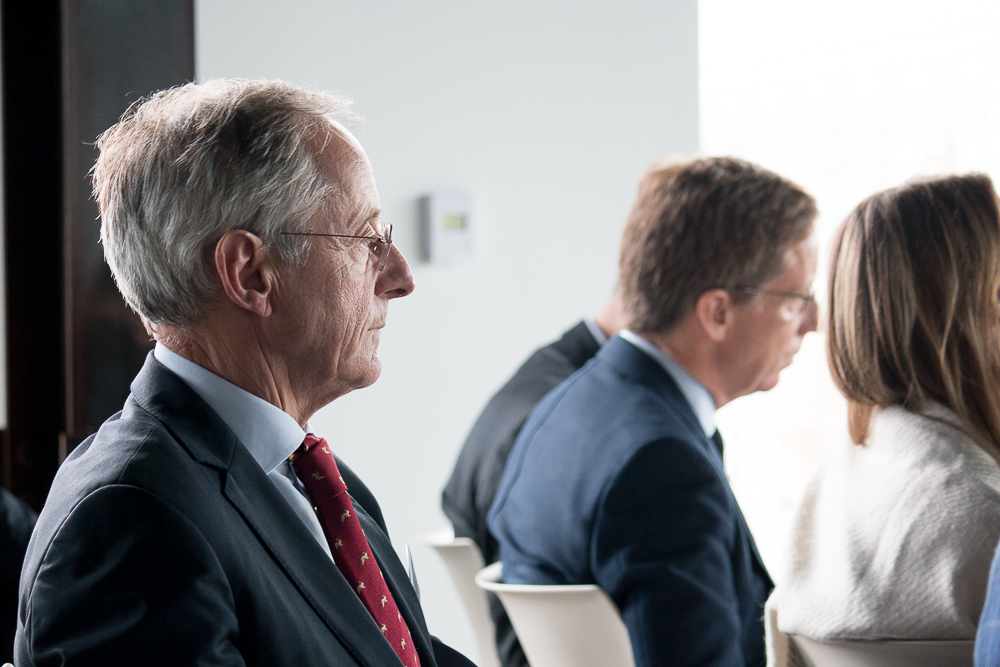 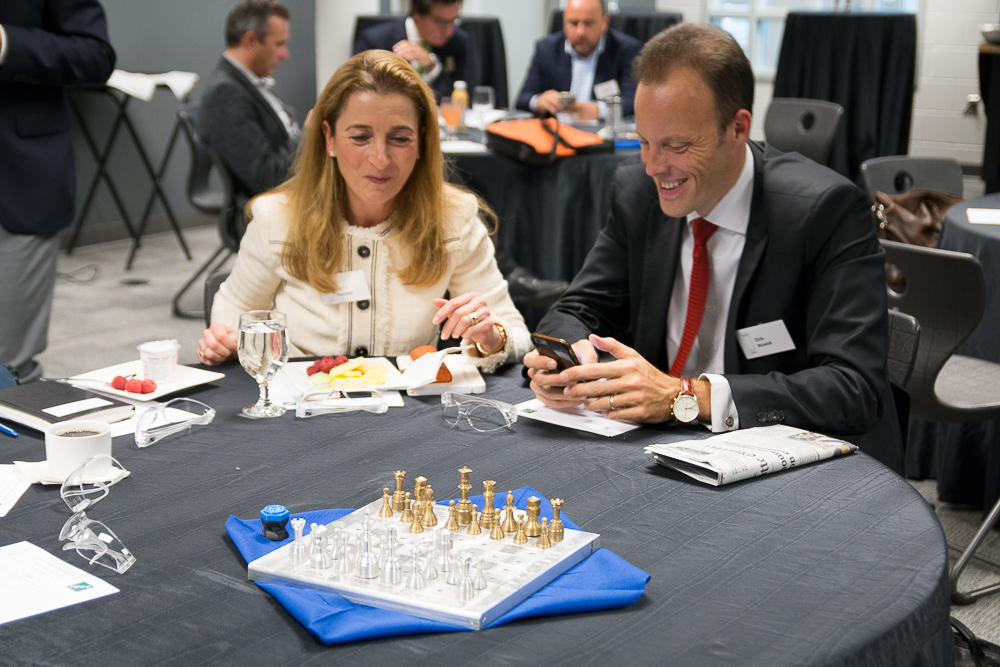 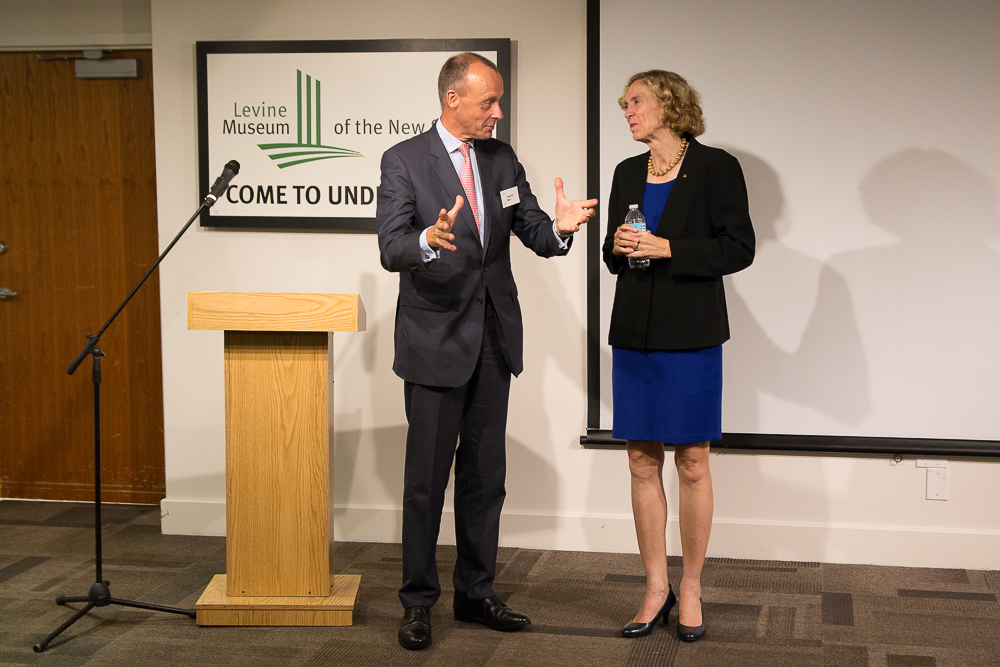 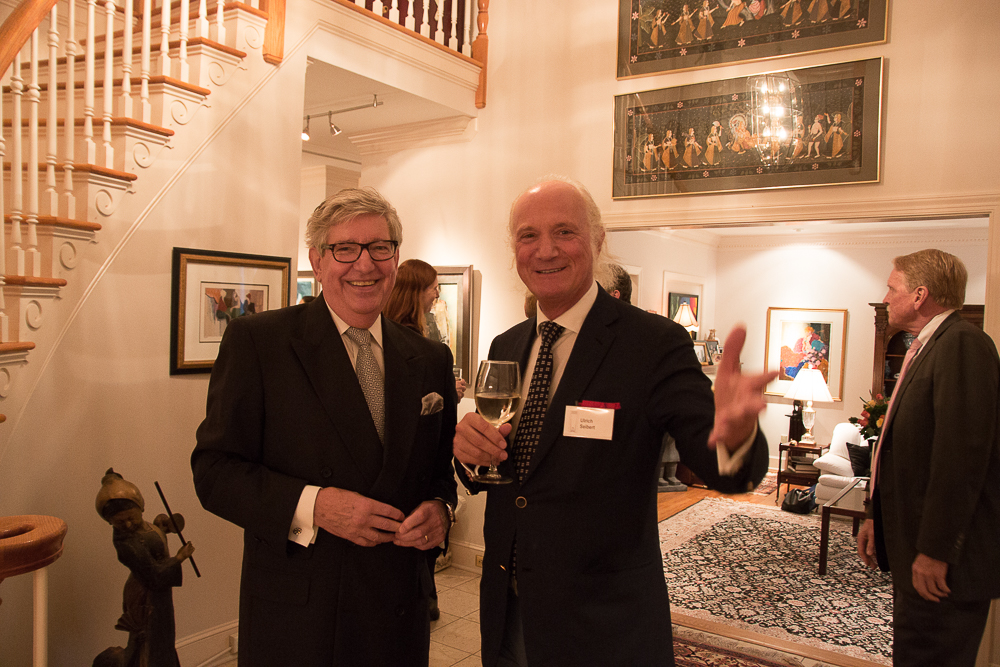 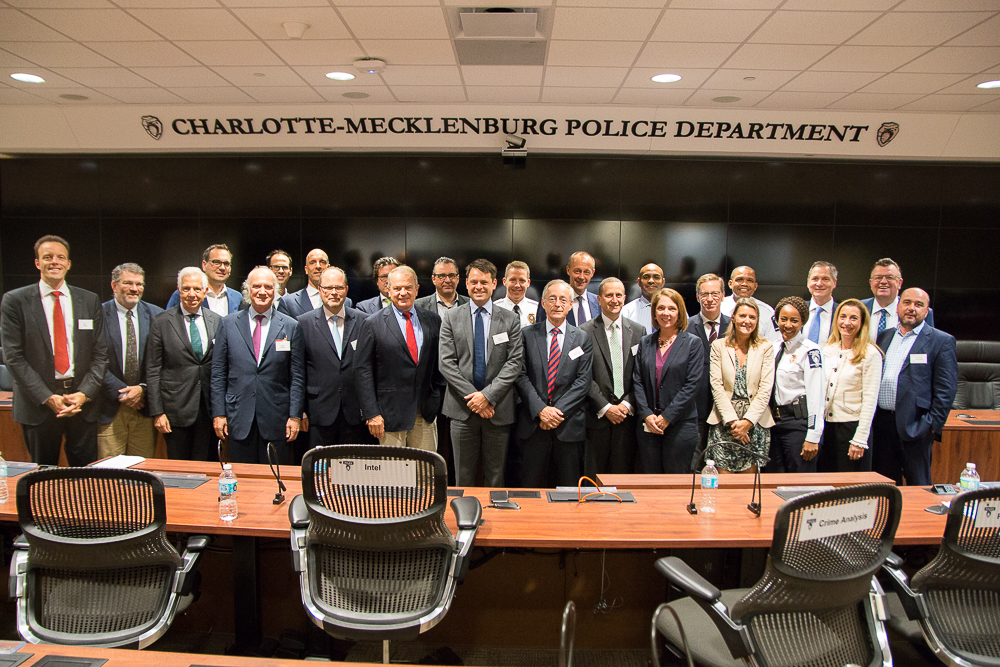 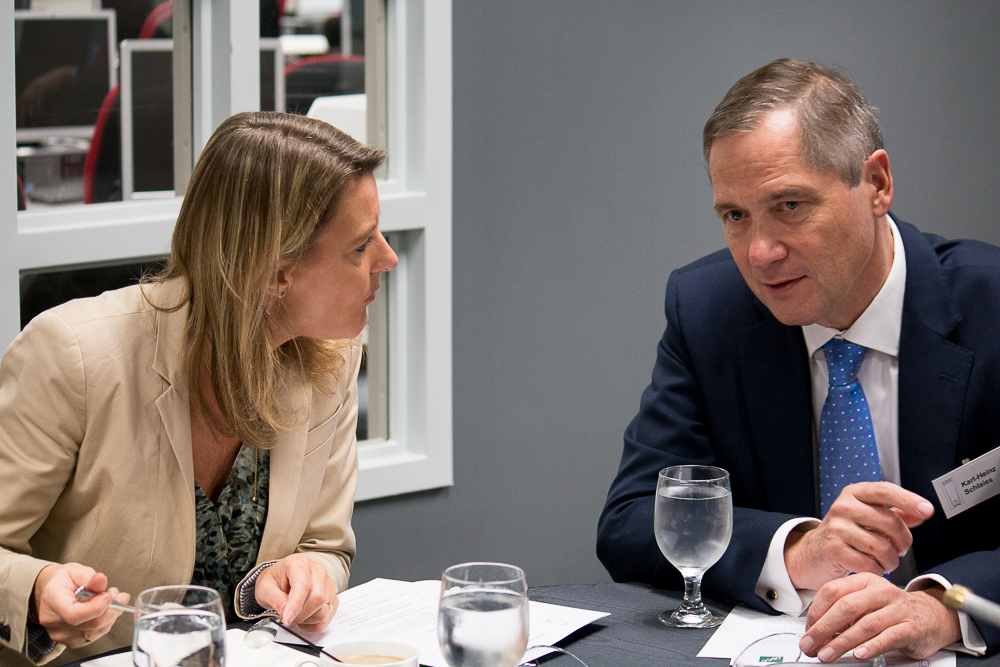 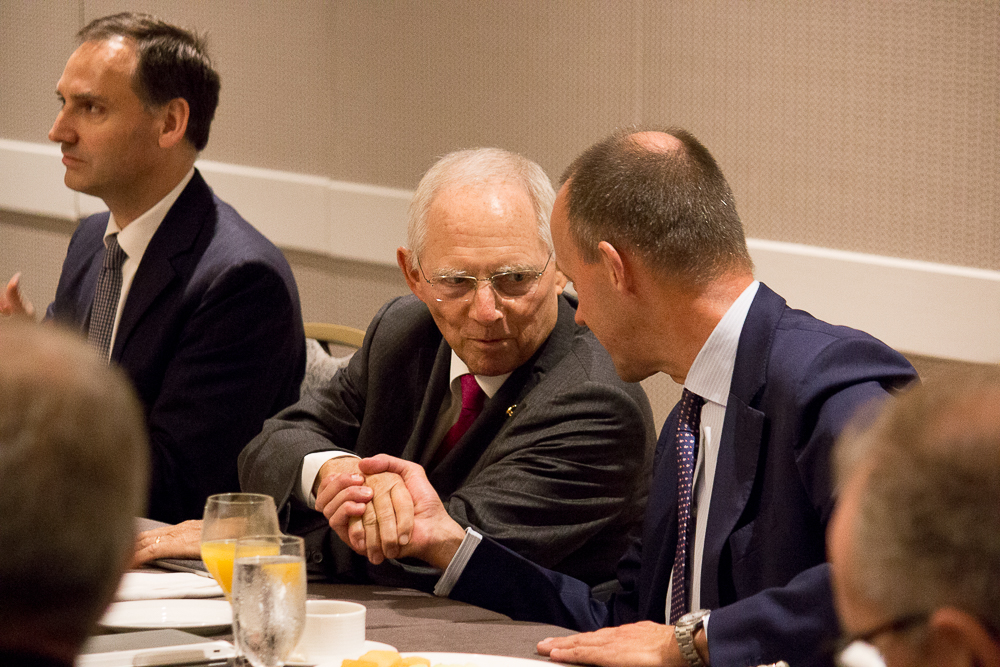 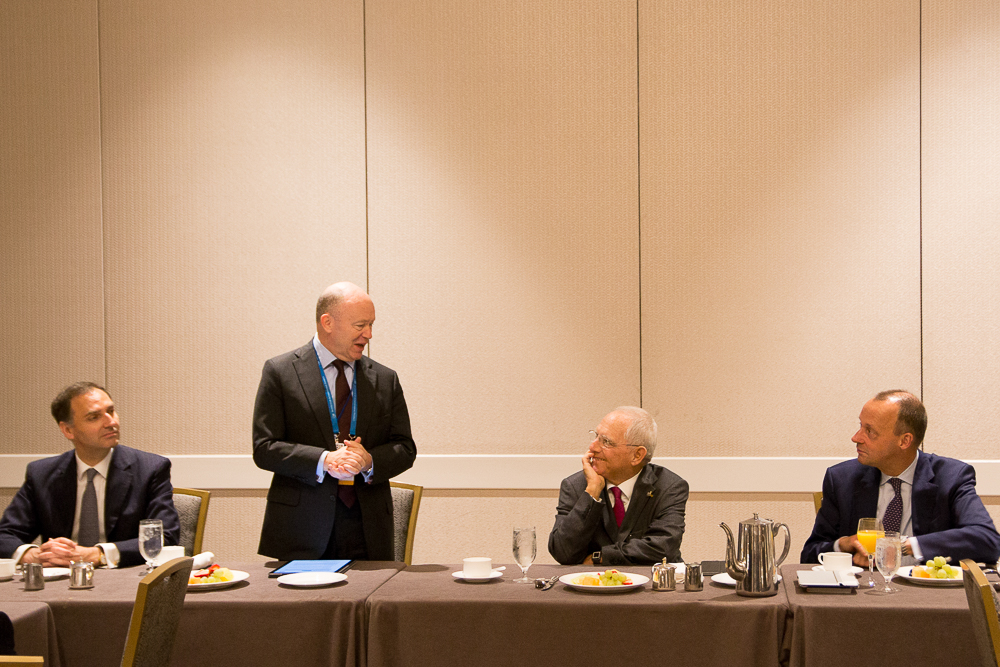 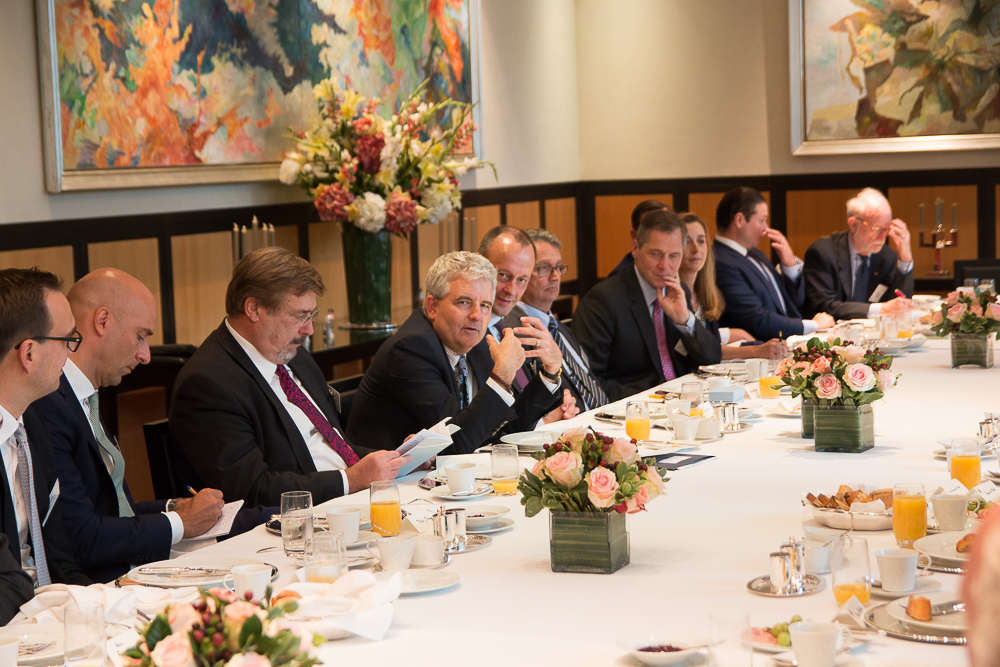 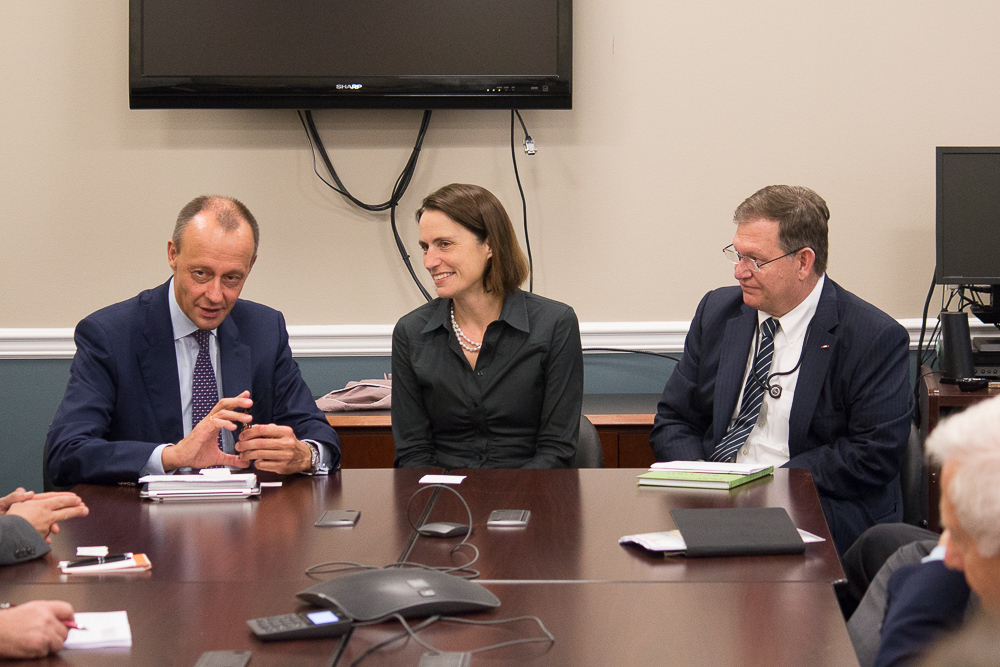 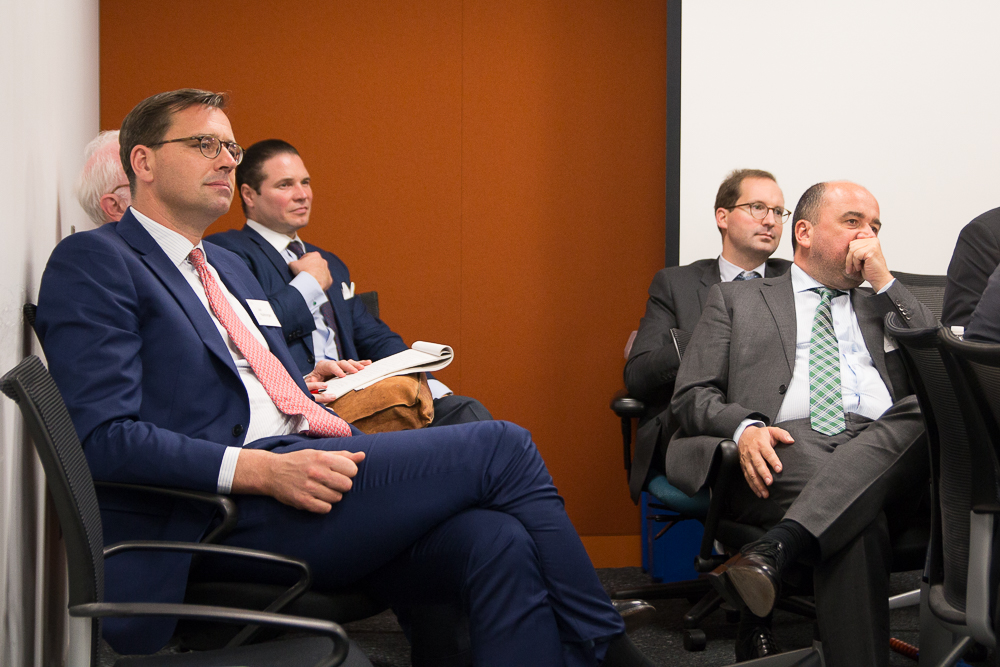 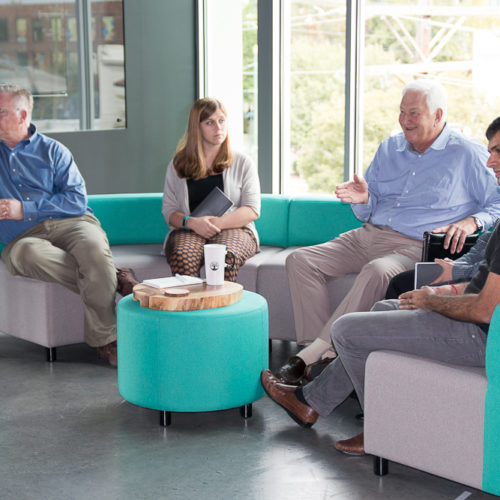 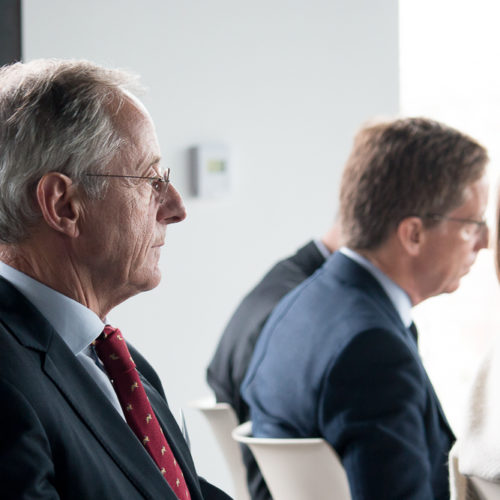 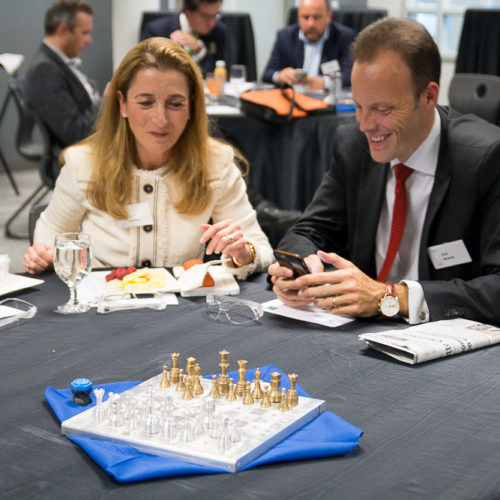 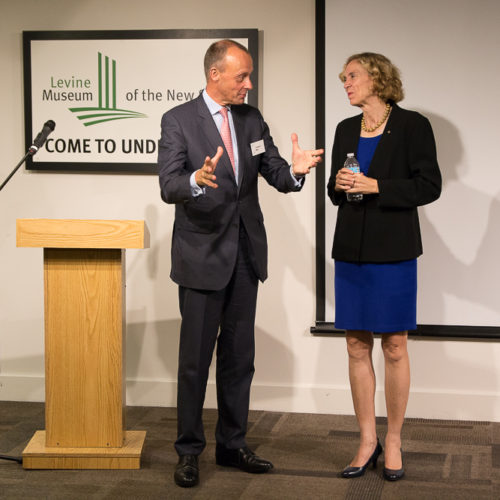 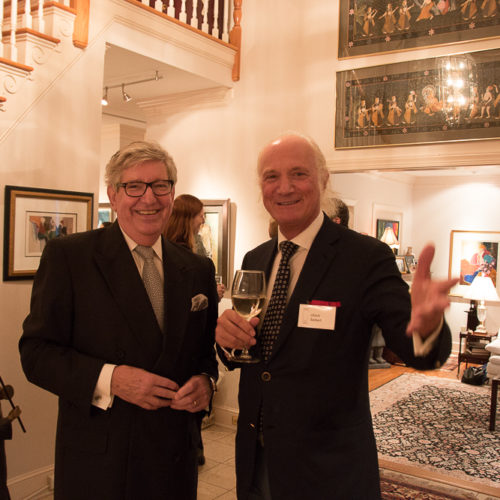 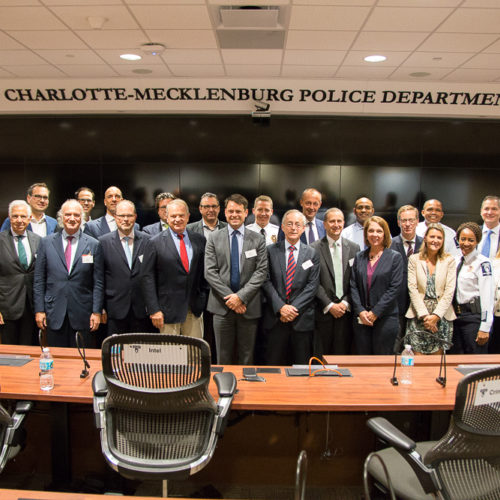 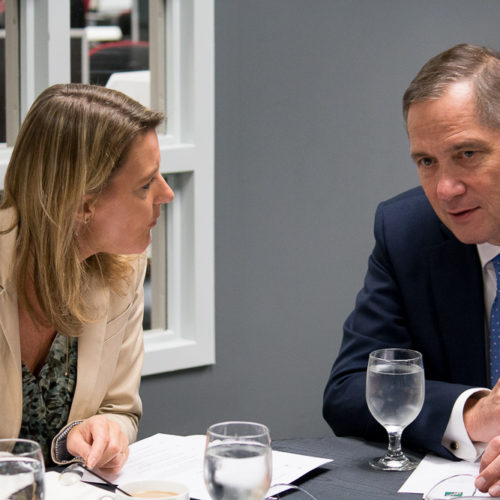 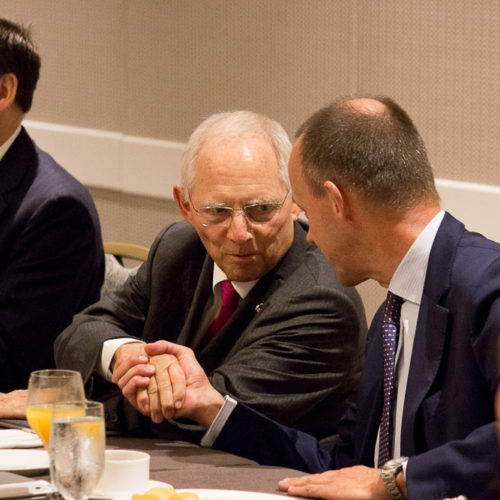 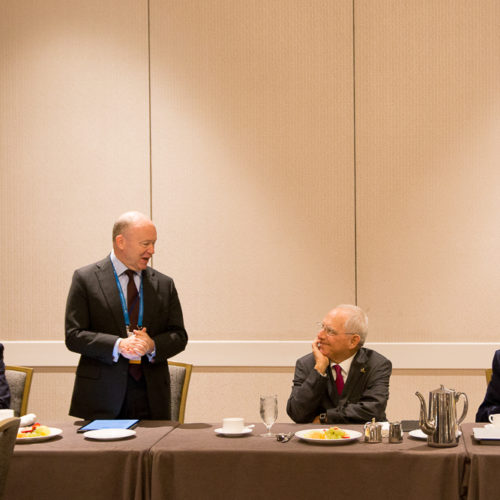 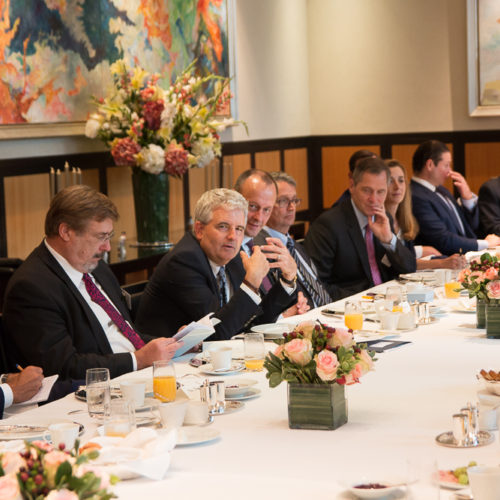 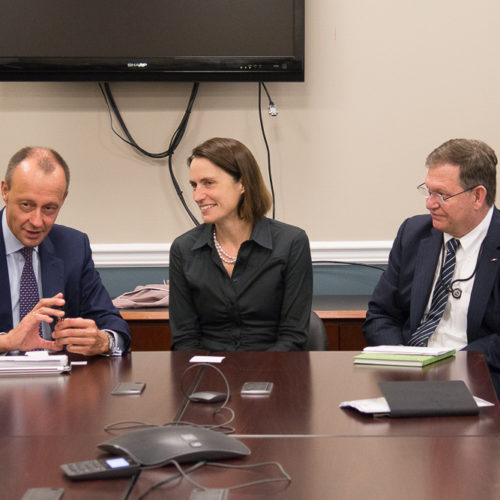 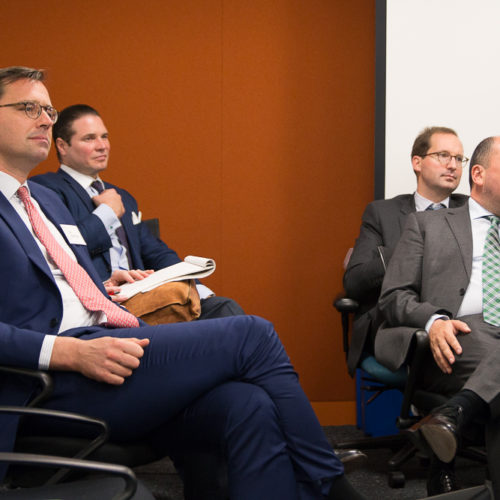 Over the course of six days, the Atlantik-Brücke delegation traveled to the United States and met with a diverse group of politicians, CEOs, journalists, academics, and others, in Charlotte, North Carolina and Washington, DC, the nation’s capital.

Each year, a group of the organization’s members undertakes this journey to gain new insights and to strengthen the links between Germany and the United States. With a new administration in place that has new priorities,  it is even more important to persist in creating dialogue. And each year, the delegates visit Washington as well as one other American city, to get beyond the beltway bubble. This year, the group traveled to Charlotte because of its strong trade ties to Germany, as well as to experience “the new South.” This term was originally coined by the journalist Henry W. Grady and characterized the new beginning for the economy of the South after the civil war and the end of slavery. In the meantime, the term has come to refer to successful economic growth in the American South, which is also promoted by innovative technologies.

Hope for the Transatlantic Relationship

“This president was elected to be disruptive,” is a sentiment echoed multiple times over the course of the week the group spent in the US. It became obvious that there is a major battle going on within the country. President Donald Trump’s attitude reflects some of the most negative ideas in American political thinking: isolationism, populism, nativism. Similar trends can be seen in Europe right now. What is unique in the US is that President Trump is acting as an independent president – independent from the party lines and positions which puts off many within his own party. The fact that many government positions have not yet been filled makes cooperation with transatlantic partners difficult.

“This president was elected to be disruptive,” is a sentiment echoed multiple times over the course of the week the group spent in the US.

And this is dangerous. Multiple government security officials noted that states with a different view of international order than the West are becoming more powerful (read Russia and China). For the American security apparatus, they see German leadership in multilateral organizations as greatly appreciated, and would like to see more of it in Central and Eastern Europe. On an “America First” note, it was pointed out that Americans “are spending as much as 3.5% of their annual salary on other countries’ security. Germany, as one of the most prosperous countries in the world must step up its own efforts.”

Despite these tensions, the relationship between the two countries remains a vital one at many levels: individual, corporate, political, administrative. Congressman Robert Pittenger (R), the US Representative for North Carolina’s 9th Congressional District, assured that “We love Germany. Don’t believe the media, they are not our friends.” Several high-ranking members of government noted that “nothing has actually changed. Connections are as strong as ever.” As a consolation it was repeated that the “administration is still working itself out” and that partners should not be discouraged from interacting because the behind-the-scenes work remains the same as always. It seems that those who actually carry out the work do not share President Trump’s negative opinion of working with Germany. As Ambassador Daniel Fried of the Atlantic Council pointed out, “actual US foreign policy under President Trump is in fact picking up where the Obama administration was headed in its final months.”

Frances Burwell, Distinguished Fellow at the Atlantic Council and an expert on TTIP, foreign policy and transatlantic relations, warned that “not only is the government rhetoric on trade bad, but so are the policies themselves, under this president.”

The completion of TTIP, as the group heard often, is unlikely. “TTIP Light,” an edited version of the agreement which focuses on shared standards and other regulatory questions rather than import taxes, may be possible.

There is a “big push for protectionism combined with a lack of historical sense in the highest levels of the administration,” weighing heavy on long-standing partnerships. The completion of TTIP, as the group heard often, is unlikely. “TTIP Light,” an edited version of the agreement which focuses on shared standards and other regulatory questions rather than import taxes, may be possible. But as Congressman Pittenger noted, “the president prefers independent trade agreements” which would of course fundamentally alter the premise of TTIP.

NAFTA is another matter of great concern, particularly for the Canadians. The question on the table is whether there will be an exit from NAFTA, or just a renegotiation. There are no clear answers yet. In both cases – TTIP and NAFTA – the conditions for renegotiation certainly aren’t favorable. As the motto goes, “Buy American, Hire American.” Wilbur Ross, US Secretary of Commerce, however, has shown openness to join the conversation on how TTIP can be renegotiated. He is aware of the relevance of free trade for the US economy.

In the end, a form of encouragement came from those who counsel against the fixation on Donald Trump. In reaching out to politicians, civil society representatives, universities, and innovators from across the country, one can find partners and allies outside of the Washington bubble. This is exactly what became obvious during the visit to Charlotte, where one notices firsthand the effect of German businesses in the region: Siemens Energy, Daimler Trucks North America, Groninger, Bosch Rexroth, Schaeffler Group USA Inc, and 200 others, including 59 US headquarters. This makes Germany the most largely represented foreign country in the region. With daily nonstop flights to Frankfurt and Munich and an active German community, the partnership between Charlotte and Germany is thriving.

The city’s outgoing Mayor, Jennifer Roberts, presented the city’s historic links with Germany – the city was named after Charlotte of Mecklenburg-Strelitz – but also its international nature. 18% of the city’s population is foreign-born, and the city boasts 1000 foreign companies, 200 of which have headquarters in Germany. 17% of the labor force of the city is foreign born, according to John Silvia, the chief economist of Wells Fargo, American international banking and financial services holding company. He also noted that nationally, foreign-born workers have accounted for half the growth in the labor supply over the past decade. Despite the unfavorable policies concerning foreign-born individuals living in the United States, Silvia hopes that “business is resilient, even with the fluctuation in politics.”

Preparing for Work in the Future Economy

In various meetings with the National Association of Manufacturers, the Central Piedmont Community College and its vocational training program, and the software startup Tresata, the need for change in educating a future workforce – both in the US and Germany – was very clear. Vocational training programs have been among the most successful exchanges between the two countries. The German vocational training model is well-known, but has lately been further improved by various programs in the US, some of whom have even surpassed their German counterparts.

Former and current US administrations have emphasized the need to fill the skills gap. President Trump in his meeting with Chancellor Merkel in March 2017 was joined by company representatives from the US and Germany and several young apprentices. This clearly shows that there is common ground and a common goal to advance alternative training options to fill the skills gap and offer a real opportunity for young people.

A highlight of the trip was a visit to Central Piedmont Community College (CPCC) in Charlotte, which currently serves 70,000 students. 20% of those students are in the College and Career Readiness Program, which offers a variety of programs to prepare students for their working careers. CPCC has offered manufacturing apprenticeships since 1995. A four-year program that guarantees a job at the end that emulates the German vocational education and training (VET) system and is primarily used by German companies located in Charlotte. To graduates, IHK Karlsruhe offers certificates of completion for equivalency in competence for automation and CNC machining, and there are student/apprentice exchanges to Stuttgart, Heidelberg, Crailsheim, and Gaggenau. Fourteen CPCC faculty are trained in Berlin at the Siemens Technik Akademie, and there are ongoing facilitator and administrator visits and courses in Germany.

Kevin Poet, director of operations at the Siemens Charlotte Energy Hub, noted that Siemens Energy has a workforce of 1,550 employees and more than one million square feet of space under one roof. It has become the largest manufacturer in Charlotte, and the third largest among the 250+ energy companies based in Charlotte. To develop a trained labor force to operate the new Siemens plant, the company began a partnership with CPCC to develop a mechatronics apprenticeship program, in 2011. By introducing the German apprenticeship model to the US, Siemens has been able to train its Charlotte workforce successfully.

The 2017 members trip to the United States has proven the need for regular exchange between the US and Germany. In a time of uncertainty, it is more important than ever to reach out to those outside of the government bubbles in both countries, and create long-lasting relationships. This has especially seemed to be the case when it comes to preparing future generations to succeed in a new economy. The presence of German companies, individuals, and organizations in the United States greatly benefits the regions they are in, and the same is true vice versa. There is a great need now for a strong commitment to the relationship between the two countries, with a hope that it will continue into the future.