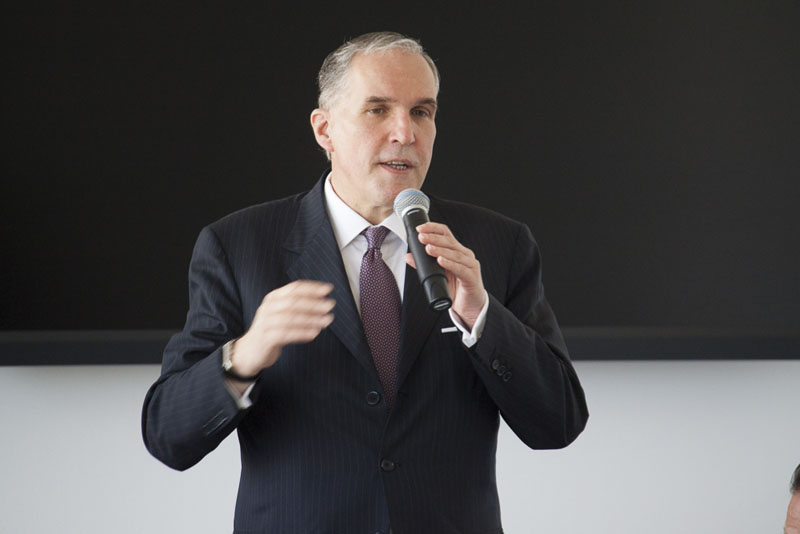 How will the increasing cost of national defense in the European Union and in NATO be collectively financed? This long-standing and critical security policy question was addressed in an internal discussion round by a select-group of experts from Atlantik-Brücke. The discussion was part of a larger conversation and exchange with the 2016 White Paper working group of the Federal Ministry of Defense on the challenges that hybrid warfare poses for the Bundeswehr. This fall, the 2016 White Paper proceedings are focusing on addressing the question of European security and defense cooperation. The participants in the discussion, moderated by Professor Dr. Burkhard Schwenker, Chairman of the Atlantik-Brücke’s Working Group on Foreign and Security Policy, operated under the assumption that the acquisition of armaments and equipment as well as the modernization of the armed forces is currently commiserate with the growing threats in Europe and will continue to do so – especially as a result of the conflict in Ukraine. Setting aside the prolonged refugee crisis in Europe, the question of security cooperation is of vital importance as it holds direct fiscal consequences. As the need for greater defensive spending increases, the strain placed on total budgets must be addressed through the assumption of further debt, higher taxes, or the restructuring of existing budget items. At the same time, it is important to acknowledge that the peace dividends brought about by the fall of the Soviet Union, disarmament, and further economic integration of the EU that allowed for the allocation of funds away from defense purposes, are no longer a given.

The experts agreed that the shift from conventional warfare to hybrid warfare, as a tactic employed by aggressors, also has immediate consequences for the technical and material equipment of the Bundeswehr. The need for modern devices and corresponding technology is rapidly increasing and it is doing so on a more condensed timeline than during the Cold War; therefore, there is increased pressure on political decision-makers in Germany and in the rest of Europe to handle the growing demands for financial resources necessary for evolving security policy in a manner that is both sustainable and responsible. The thesis, that new challenges in the acquisition of military equipment can be faced effectively and efficiently with the help of a jointly-shared European financing scheme, was highlighted by the experts as an applicable and important part of the solution.

On the path towards Pooling and Sharing
For this reason, it is critical for countries to be willing to sacrifice a degree of national sovereignty in the defense sector. If the Europeanized form of financing is successful, it is possible that the Bundeswehr and the other European armed forces will regain the same capacity to respond to threats that they possessed back in 1989. In the meantime, national defense policy path dependencies have manifested themselves in the fields of planning, acquisition, and structure that have stymied pan-European military-industrial solutions. The dominant European-based defense industry is globalizing and, at the same time, third-party suppliers abroad are attempting to enter and compete in the European market; these trends threaten to fragment the defense sector in Europe. The experts in the discussion recommended impeding this trend through policy and implementing the concept of Pooling and Sharing as a tool against it. In sum, it is important for the EU and European NATO states to work together to create new European and transatlantic defense resources and to share these resources with one another. The benefits lie in improved coordination of defense technology, compatible armies, and in the case of emergency, a higher degree of operational capability and strength resulting from newly-achieved economies of scale.
The fundamental acknowledgement that purely domestic solutions to security policy are no longer possible and that a higher degree of flexibility is necessary has long been part of the discourse on this topic. To this end, the experts have identified some positive developments that include the joint path taken in the development of the NATO Spearhead Force and cooperation with the Netherlands, whose 11th air brigade has been supporting the Rapid Forces Division of the Bundeswehr since June of 2014. Furthermore, one of the eight German armed forces brigades is under European control. These examples demonstrate that the EU and NATO member states have begun the process of integration as outlined by the Pooling and Sharing concept. The participants agreed on a substantial argument for a comprehensive financial Europeanization of security and defense policy: while it would not be productive for the White Paper working group to define military emergencies in every imaginable form, it is also important not to exclude any probable critical scenario from the discussions. Against the backdrop of this extensive task, it is clear that in order to respond to attacks adequately, it is necessary to have coordinated, jointly-financed, sophisticated, and diversely-equipped European defense cooperation.

To achieve this goal it is imperative to conduct this discussion in the strategic community and to convey the importance to the general public. The experts emphasized that the debate should center on what kinds of leadership roles are necessary and what responsibility and commitment mean for international security policy in concrete terms. Most importantly, it will be important to discuss what it means to be an active member of NATO. The political decision-makers will not attract the public with the maxim „leadership from the center“, because this claim is too vaguely formulated and implies that Germany will retreat from responsibilities and rely on US security guarantees on European soil. Those responsible should make abundantly clear that the EU and NATO have a serious security problem on their periphery; furthermore, European states should develop collective legitimacy and solidarity to operate as a counterpart to the transatlantic defense alliance. Indeed, the crisis in Ukraine poses an inevitable problem for the western allies as well, because threats to security are ever-growing and should not be underestimated in economic or technical scope.