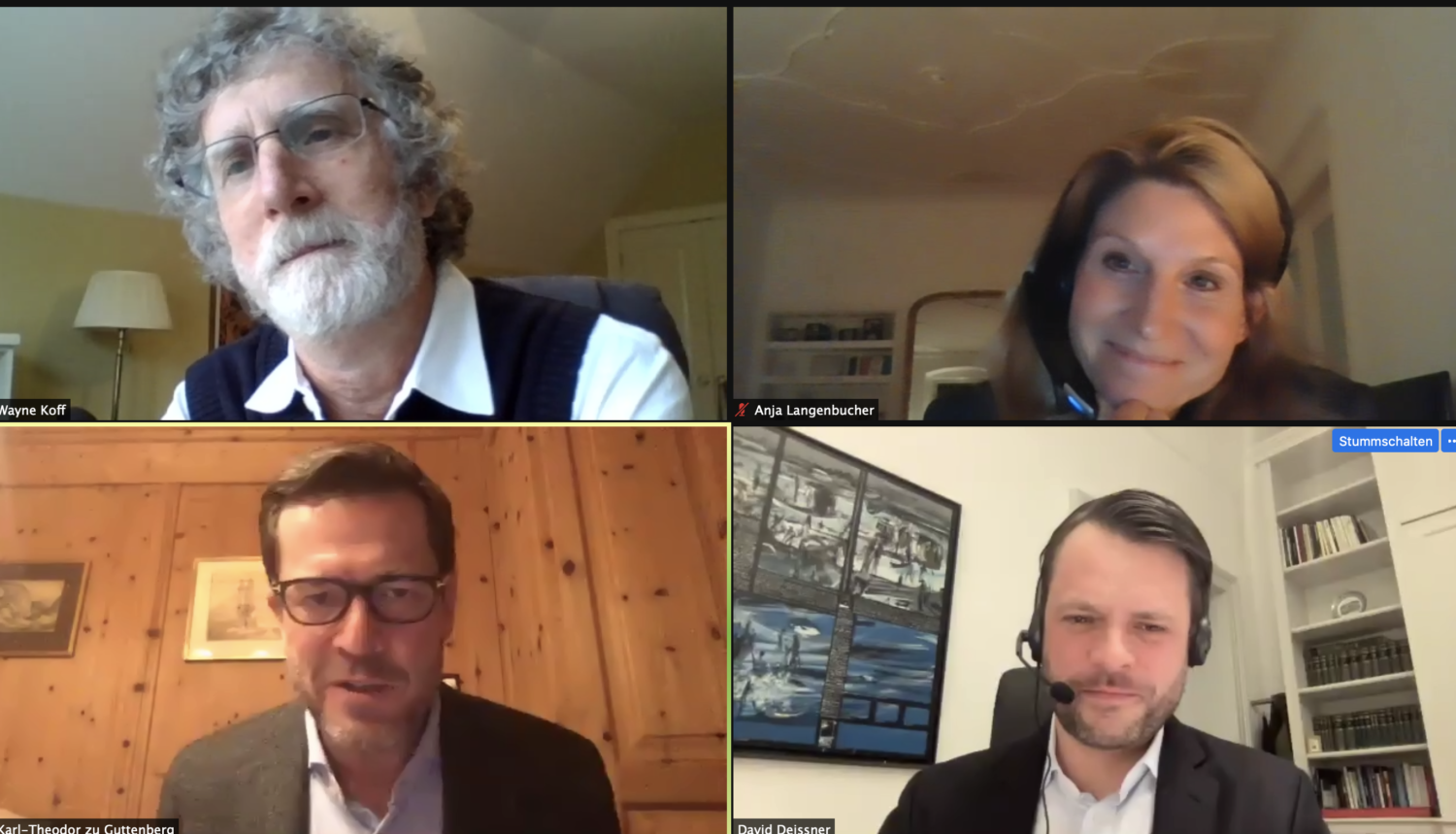 The global COVID-epidemic has shown the critical importance of understanding the human immune system. Wayne Koff, CEO of the Human Vaccines Project, and Anja Langenbucher, Director Europe of the Bill & Melinda Gates Foundation, discussed these and other lessons of the COVID-crisis with Karl-Theodor zu Guttenberg.

Scientists have predicted the outbreak of a pandemic for some time now. To be well prepared for such an outbreak, worldwide different initiatives are working at the intersection of genome research, biology, and artificial intelligence. One such initiative, the Human Vaccines Project (HVP), was initiated by Wayne Koff at Harvard University in 2016. Today, he is the president and CEO of the initiative that started out conducting research on HIV. Together with a global network of companies and research centers, Koff and his team are pursuing a visionary goal: “In the long-term, the Human Vaccines Project is looking to create a model of the human immune system, with the help of A.I.,” says Koff. Within a decade, he estimates, experts in the field of artificial intelligence will be able to create such a model.

In the long-term, the Human Vaccines Project is looking to create a model of the human immune system, with the help of A.I.Wayne Koff

Another important actor in the worldwide fight against diseases is the Bill & Melinda Gates Foundation. The foundation that was established by the Microsoft founder and his wife had also warned against the outbreak of a worldwide epidemic, long before the outbreak of Sars-CoV-2. The foundation specializes in supporting the development of vaccines. The Gates Foundation supports Koff’s work at the HVP. Anja Langenbucher, the Foundation’s Europe Director, made a plea for multilateral cooperation. She argued that the COVID-pandemic “serves as a textbook example” of “a global problem that can only be solved globally.” The discussion was moderated by the former federal minister Karl-Theodor zu Guttenberg, who is also affiliated with the Human Vaccines Project.

Understanding the Effectiveness of the Human Immune System

In the effort to decode the human immune system, the coronavirus outbreak proved to be instructive, said Koff. The fact that a vaccine against the coronavirus was developed in less than a year constitutes an unmatched scientific achievement. Yet, many questions remain unanswered: Why are the elderly especially vulnerable to the virus? And why do some react well to the vaccine while others only develop a modest immunologic response? There is a “universe of receptors” in the human body, which is how the immune system sees and reacts to internal and external intruders. While each person out of the 7.7 billion people on earth has an individual immune system, the human immune system does have some common rules. Koff pointed out that the receptors involved in the immune system make up the puzzle pieces of the A.I. model they wish to create. The vaccines and the individual reactions of the immune system to them are tools that can help scientists obtain the exact location and function of the different puzzle pieces in the model.

A generation ago, decoding the human genome was considered “a transformational event”. Koff argued that with the help of A.I., it is now feasible to analyze and interpret vast amounts of data that can help us understand the immune system, and especially its effectiveness. Thanks to A.I. and machine learning, it is already possible to achieve a high level of sequencing of different viruses. However, he sees three obstacles that need to be overcome in order to accelerate the efforts in this field: combining financial resources – billions of dollars are needed –, coordinating international actors, and converging different global initiatives. However, according to Koff, HVP’s mission can be achieved. He added that exploring the genetic foundation of the human immune system would be a scientific milestone.

Sequencing has allowed us to more accurately develop the right diagnostic tools, but it has also guided the development of vaccines.Anja Langenbucher

However, the work on genetic sequencing is not just needed to combat COVID-19. Treating and eradicating polio, malaria, and various types of cancer also relies on cutting-edge R&D and technological progress. “Sequencing has allowed us to more accurately develop the right diagnostic tools, but it has also guided the development of vaccines,” Langenbucher stated. The already known mutations of the coronavirus underscore the importance of understanding how the virus is transmitted and how it spreads. This is why geopolitics play a crucial role in the development of safe and effective vaccines. Without the exchange of knowledge and data across continents and without the joint use of research facilities, production sites, and storage capacities, understanding the spread of the virus is much more difficult. Especially developing nations in Africa should be provided with adequate supplies and resources – such as personal protective equipment, testing capabilities, and later on vaccines – to fight the virus.

A Moral and Economic Argument for Global Cooperation

The much-discussed vaccine nationalism and distribution debates pose a big challenge, stressed Langenbucher. Making the vaccine available globally is not just a moral imperative, but it is becoming increasingly evident that fighting and eradicating the corona pandemic globally makes economic sense as well. “If the virus mutates in a remote country, far away from your own, that mutation will come back to us,” she warned. Langenbucher suggested that for the G7 and G20, the global fight against the virus and the fight against climate change should be on top of the agenda, which is also suggested in the leading industrial nations’ “One Health Approach”. The public and private sectors and NGOs should work together to create political, economic, and scientific momentum.

Koff agreed with this and argued that the question is not if another virus will emerge, but when. Scientists know that the SARS mortality rate is 10%, with MERS at 33%, – but they don’t know why. “Without understanding the underlying principles of the human immune system, we are going to be extremely vulnerable to the next emerging infectious disease,” Koff stated. Shortly before the event, reports came out confirming that there had been a 100 million coronavirus cases worldwide, with Koff estimating that there will likely be “hundreds of millions more,” before the virus is defeated. “We have to get in front of the curve,” he stressed.