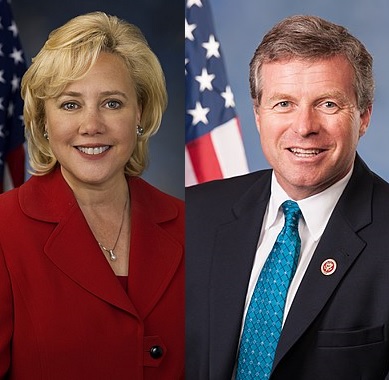 „All Eyes on the United States: A Readout of the 2018 Midterm Elections“

With all 435 seats in the U.S. House of Representatives and one-third of the seats in the U.S. Senate up for election, the results of the U.S. midterm elections on November 6 can change the state of play in Washington and influence U.S. domestic and foreign policy. Whether Republicans can keep their majorities in both chambers of Congress or if a Democratic „blue wave“ occurs are potential scenarios that will affect President Trump’s agenda and ability to govern. Historically regarded as a referendum on the current U.S. president, the midterms will also provide an opportunity to take the pulse of the American electorate and act as a primer for voter mobilization before the presidential election in 2020.

We are pleased to invite you to a panel discussion featuring former Members of Congress, the Honorable Charlie Dent and the Honorable Mary Landrieu, to hear their expert assessments and discuss with you their predictions on the course of American politics inside and outside the Beltway.

Charlie Dent served seven terms (2005-2018) in the U.S. House of Representatives representing Pennsylvania´s 15th Congressional District. He distinguished himself as a leader on transatlantic issues and was the Co-Chair of the Congressional Study Group on Germany. He was a senior member of the House Appropriations Committee and served as Chairman of the House Ethics Committee. Prior to his tenure in Washington, Dent was a member of the Pennsylvania General Assembly and of the Pennsylvania State Senate.

Mary L. Landrieu was the first woman from Louisiana ever elected to serve a full term in the U.S. Senate. During her 18 years in office (1997-2015), she chaired the Committees for Energy and Natural Resources as well as for Small Business and Entrepreneurship, and served on the Appropriations Committee and the Armed Services Committee. Mary Landrieu started her career in public service in 1979, when she was elected to the Louisiana State Legislature at the age of 23.