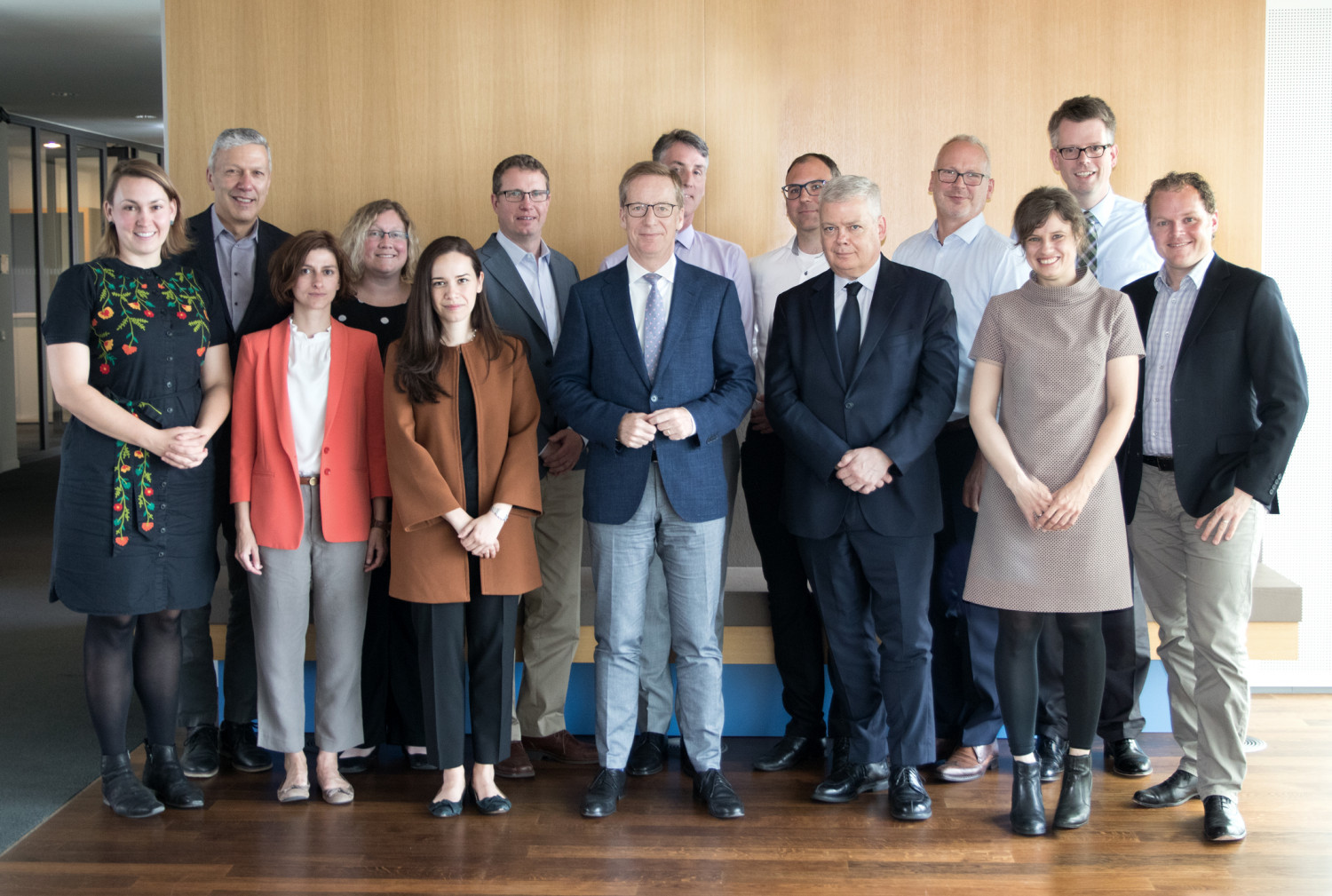 Healthcare Reforms in Canada and Germany

During a two-day workshop in Cologne, researchers from Germany and North America discussed their respective health care systems in order to improve the bilateral understanding of systemic differences and similarities and to discuss current policy options. The workshop, co-hosted by Michael Hüther (German Economic Institute) and Pierre-Gerlier Forest (University of Calgary), has addressed one of the core questions of health care systems: “How can we manage problems resulting from a disproportionately high increase in expenditure in a dynamic and imminent demographic change?”

The collaboration is based on joint Atlantik-Brücke meetings and talks over the last two years. For the coming years, a continuation on political issues is planned, which are of great importance in both countries. Behind this is the finding that Canada and Germany are characterized by a high degree of socio-structural similarity and are both federally constituted states. This makes comparative analysis, which should result from the conference in in-depth work, even more valuable for both sides.

The German and Canadian health care systems show significant differences in organisation principles, but some surprising similarities in details of policy options and in results. Fundamental for the understanding of the German reform debate are the political and economic challenges resulting from partial interests which are well protected by the legislation. This partly explains why the German reform debate oscillates between two poles for decades – a stronger state control on the one hand and strengthening of market economy principles on the other. Reforms have proven to be difficult in Canada as well, in part because of the fragmentation of the system, which limits the dissemination of innovations, and in part because of entrenched national standards and conditions.

German policymakers face the challenge of balancing patient access to effective medicines with affordability and rising costs. In order to contain pharmaceutical expenditure and ensure quality and efficiency in pharmaceutical care, the German health policy employs a mix of regulatory mechanisms. In 2011 a new pricing system for innovative drugs was established. Since then, the umbrella organisation of statutory health insurance funds has been negotiating prices of innovative medicines directly with manufacturers. Generics are usually less costly than their originator, so that their use is endorsed as a cost-containment mechanism. The pricing system and cost-containment measures do not exclusively affect the statutory healthcare market – they have an impact on prices achievable for the pharmaceutical industry as well. Therefore, a sustainable pharmaceutical policy strikes a balance between the concerns of health policy in terms of ensuring financial viability of the statutory health care system and the concerns of economic policy, that is facing the task of ensuring a vital pharmaceutical industry locally. The idea of ​​considering economic policy concerns regarding the question of creating a sustainable pharmaceutical policy has not been discussed in Canada so far.

Canada is the one of the only OECD nations without federal publicly funded pharmaceutical insurance. As a result, the Canadian “patchwork” has emerged with each province offering a variety of publicly funded insurance plans to their citizens. This leads to inequitable access to drugs across the country. As Canada actively reconsiders its drug insurance design, an opportunity exists to learn more about the impacts of drug plan design. Little is known about how drug plan design, within the context of a universal healthcare system, affects access, equity and affordability of the drug plan.

Primary medical care in Germany is provided by physicians in private practice. Networked patient care fails as outpatient and inpatient care are strictly separated. Furthermore, patients are free to choose between resident doctors and a system of managed care is missing. Finally, each doctor´s office is capped in its budget. These framework conditions hardly help with the implementation of innovative care. Accordingly, it would be important for the German debate to learn about international role models. Attention is being paid particularly to the question of how to meet the demand for uniform medical care standards in rural and urban regions – a problem that arises in North America due to much larger geographical dimensions.

In an era of intense interest in Primary Healthcare reform in Canada, Primary Care Networks (PCNs) have emerged in policies around the world as specific mechanisms for improving the integration of care. The PCN policy concept has been implemented in several different forms and under different names in various Canadian provinces. The example of the efforts taken to implement PCNs in the province of Alberta shows a evolution and outcomes of operationalizing the PCN concept. In British Columbia, primary care is mainly delivered by physicians in private practice paid fee-for-service by the provincial public insurer. Here it turns out that incentive payments to individual physicians had a limited impact on care processes. Furthermore, they do not increase primary care visits and there is no increased evidence of reduced hospitalizations or costs.

In Germany, Diagnosis Related Groups (DRGs) have been used since 2004 to remunerate hospitals for their services. The DRG system was developed in accordance with the Australian model. Since then, there has been a decline in the length of inpatient care and a reduction in hospital bed capacity in Germany, while significant numbers of new medical staff were recruited except nursing staff. It is to be discussed whether this development was caused by the DRGs. But nursing staff are urgently needed in long-term care. Demand will increase even further as a result of demographic change.

In Canada, hospital care is free for patients to access. Hospitals are funded by their province’s ministries of health and they account for the largest share of provincial government spending on healthcare. Labor costs and medical technologies are driving demands for increased spending on hospitals. But provincial governments struggle with improving access, quality and effectiveness in return for new spending. The policies that some provinces have implemented for funding hospitals have seen changes over the past decade, with some introducing financial incentives for more volume and cost-efficient care. Some provinces use global budgets to fund their hospitals, a policy that causes hospitals to restrain access to stay within budget. The effects of the policies used to fund hospitals ripples into other sectors of the healthcare system, including facility-based long-term care, home-based care and emergency services.

Education and technology are fundamental and intrinsic underpinnings of health care delivery. The first established public hospital in the US, Pennsylvania Hospital, was founded in 1751. From inception, learning and training was crucial to delivery of health care services, so this was also the home to the first surgical amphitheatre and first medical library. The American healthcare workforce has undergone tremendous change and transformation in the last decades due, in part, to the incorporation of electronic health records. These provide huge opportunities for research and research-based policies, especially with new options related to the spheres of ‘big data’ and ‘data science’.

Digitalisation does not stop at the Germany healthcare sector, too. Studies on potential efficiency gains that can be generated by digital health are attracting attention in Germany, while urgent economic and socio-political consequences have hardly been addressed so far. How can contributors participate in efficiency gains if legally well protected groups of providers of medical services can act like rent seekers in the German health care system? How can the idea of a health insurance based on solidarity persist if digitalisation creates options and incentives for adverse selection? How can data be used to deliver greater insight into the health care system? Regarding digitalization in the German health system, there are still a number of questions that need to be critically discussed.