“The trade war with China will be resolved within six months” 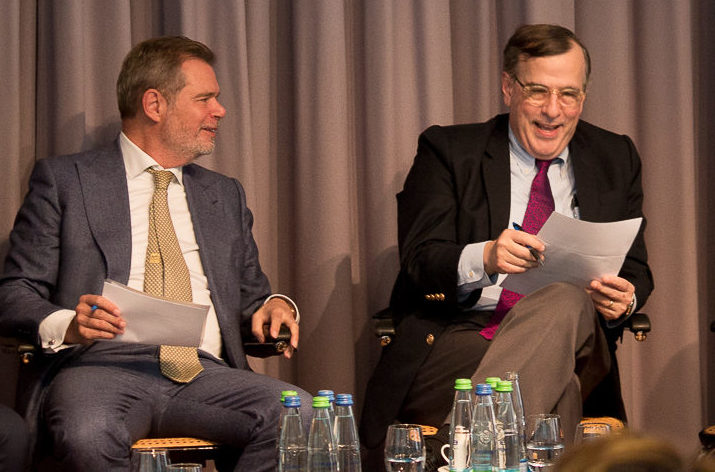 Mr. Lavin, with its Belt and Road Initiative China follows a very clear economic and geopolitical strategy. Is the reaction from the USA and the European Union (EU) to this large-scale project sufficient so far?

The United States and the EU have both been taken by surprise by the project’s scale. There has been some response, but it has not been adequate. For example, the largest and very promising opportunity for the United States to improve its economic connectivity in East Asia was the Trans-Pacific Partnership (TPP), a trade agreement with twelve countries anchored by the United States but also by Japan. It would have allowed all the smaller countries of the region to at least have an alternative to China. The American withdrawal from TPP was a step backwards.

The United States and the EU have both been taken by surprise by the project’s scale.

The EU has not been active in this space and has not risen to the challenge of the Belt and Road Initiative. However, the EU has several strengths: One is the enormous size of its home market. The second is its soft power. This means that in their home markets, countries in Africa and Central Asia have an enormous need of a better connectivity to Europe. They want to establish a settlement market and an investment market. The EU should look for ways to reduce trade barriers and the costs for a lot of the countries participating in the Initiative.

Along with the Belt and Road Initiative, China is becoming a rising energy superpower. What could a consistent transatlantic response to this endeavor look like?

The core of a transatlantic response to China in general should be a EU-US free trade agreement. We should be able to create a market that includes the EU and the United Kingdom with a global GDP of about 35 percent. This market would also include the USA embedded in the North American Free Trade Agreement (NAFTA) contributing approximately 25 percent of the global GDP. This would be an enormous step towards prosperity. But even more important vis-à-vis China is that a free trade agreement would set a global template. Think of countries like South Korea, Australia, Egypt or Turkey which are very decent economies. They would adapt their standards in order to participate in this EU-US-NAFTA common market. Consequently, there would also be global norms for specific energy sector areas such as automobile fuel efficiency, electrical usage of home appliances, labeling and testing standards.

The core of a transatlantic response to China in general should be a EU-US free trade agreement.

The trade war between the United States and China has escalated this year. The IMF has just revised its global growth forecast downwards. Do you see any chance to find pathways to a constructive dialog?

Yes. This trade war is driven by Donald Trump’s view. In some respects, he has done a reasonably good job in identifying problems with China’s feasance of trade issues. But he has done a reasonably bad job in developing a policy response to this. He has increased friction in trade and costs of trade. There are contradictions in his approach: If China is the main problem, why do you spend 18 months in arguing with your NAFTA partners? 99 percent of the trade within NAFTA is not a problem. You are spending your political capital, all of your energy and time on NAFTA. And why do you have the conflict with the EU on steel tariffs?

I suspect the trade war with China will be resolved within six months. Not for trade reasons, but almost for stylistic and psychological reasons. I can tell you two things about president Trump. One point is that he gets fatigued, he gets bored. His two most important issues when he was running for president were immigration, including building a wall to Mexico, and president Obama’s health policy. He makes some efforts on both issues, and he has limited success on both. But after a year he didn’t even talk about the wall, or only occasionally. The same applies to Obama’s health care. For Trump, China is now the greatest threat to America. But in a couple of months it will be something else. Trump is very interested at the moment.

One point is that president Trump gets fatigued, he gets bored.

The second point is that he has to be the hero of his own story. He alone determines what is successful. On trade issues, Trump is both the power maniac and the fire marshal. He lights the fires and he puts them out. Then he declares victory. This has been the case with NAFTA. This will happen again in the trade war with China.

The U.S. administration accuses the Chinese government of trying to influence the upcoming midterm elections by fake news and cyber attacks. China is denying the accusations. What consequences could this development have both in America and in China?

China is playing more of a role in American civic life than it has ever played. I am not concerned when this is transparent. If the Chinese foreign ministry puts Xi Jinping’s speeches in English on a web page, this is not a camouflage of a secret project. This type of activity is a constructive use of diplomacy. But if China is suppressing thoughts and words of Chinese students in American universities, this is very harmful and an inappropriate intervention in the United States. The USA should provide human rights guarantees to anybody who is studying in an American university. I would encourage US civic organizations and universities to watch out. We have a responsibility to protect open discussion in the United States. We should not allow any foreign power to intervene in our society. No one should try to alter outcomes of an election.

We should not allow any foreign power to intervene in our society.