The State of the Chinese Economy and Implications for Western Alliances 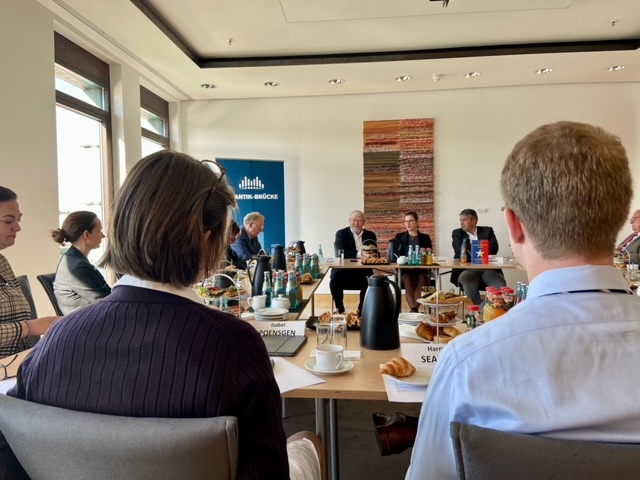 Former Australian Prime Minister and current President and CEO of the Asia Society, Kevin Rudd, assessed the economic and ideological developments of the People’s Republic under the leadership of Xi Jinping at an Atlantik-Brücke roundtable with Sigmar Gabriel. The two panelists talked about the ramifications of China’s development for the Western world. Atlantik-Brücke’s CEO Julia Friedlander moderated the conversation.

During the discussion, Rudd and Gabriel touched upon a whole range of issues: Ideologically, Rudd described the shift which has taken place under President Xi, as well as China’s efforts to rebuild its status as a globally leading nation, both economically and militarily. Rudd and Gabriel reflected on China’s experience with European colonialism and how this still impacts political decision-making today. In addition, our guest speakers exchanged views on the role of the private sector whose economic growth has declined in recent years, as well as the consequences associated with those developments on a global and domestic level. Rudd pointed to Xi Jinping increasingly taking a harder line against private companies whom he perceived as a threat to his power.

Finally, Rudd gave some recommendations as to how the West, which he suggested to refer to with the more inclusive phrase “Democratic World”, could respond to China’s policies. He pleaded for the definition of “guardrails for strategic competition”. Rudd also expressed the need for clear red lines between the U.S. and China to reduce the risk of escalation in the future, be it in the economic sphere or in a geopolitical context –  as in the case of Taiwan.

Atlantik-Brücke would like to thank the Australian Embassy in Berlin as well as Allianz SE for making this event possible.