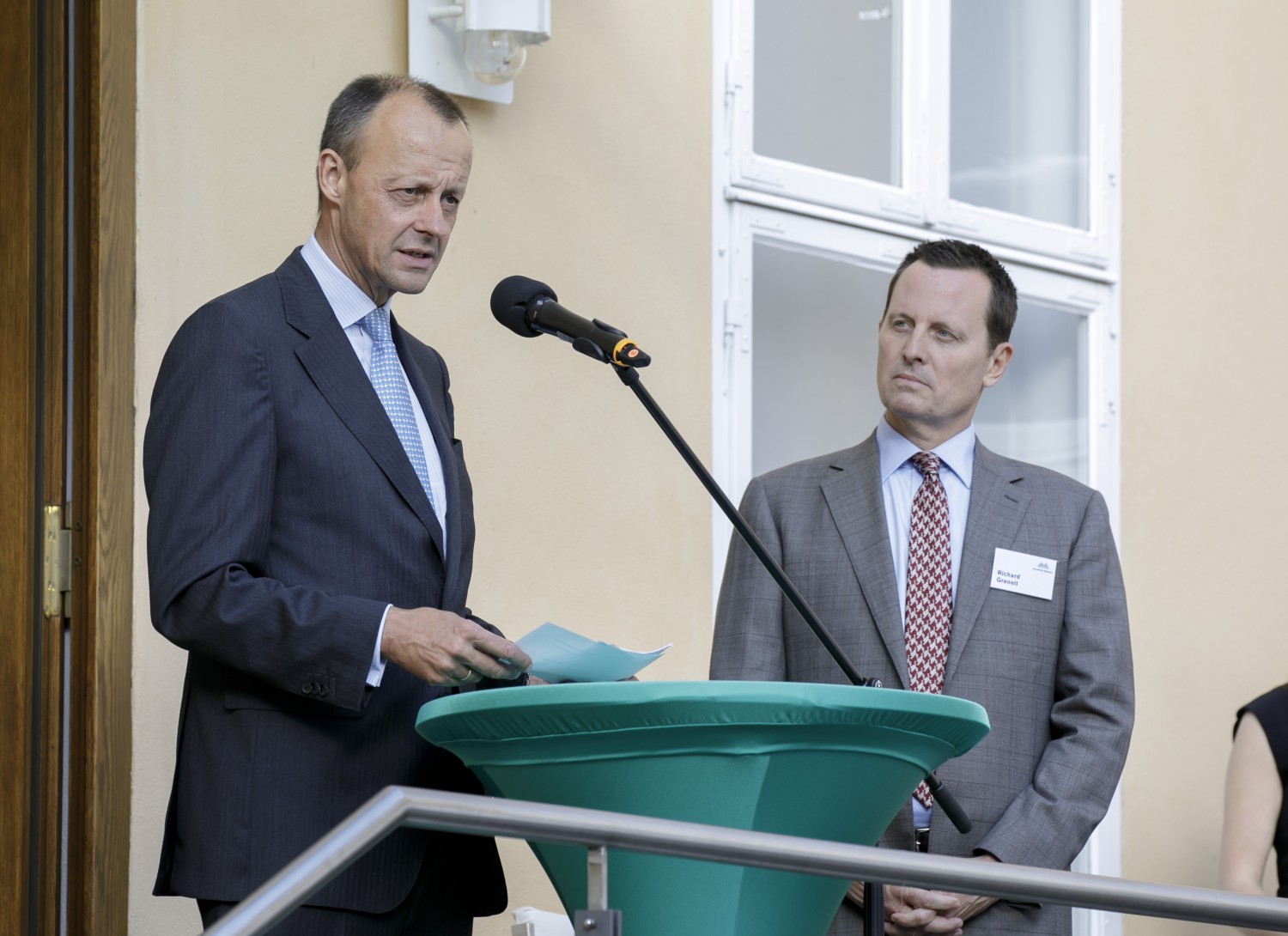 It is my great honor and pleasure to extend a warm welcome to the new U.S. Ambassador to Germany, Mr. Richard Grenell. He touched German ground on the 8th of May and presented his credentials to Federal President Frank-Walter Steinmeier on the same day.

Dear Ambassador Grenell, you have finally made it to Berlin! We had to wait for you quite some time.

We are therefore all the more looking forward to getting to know you in person, and to introducing you to our members and friends of Atlantik-Brücke. This distinguished group of people passionately supports an open transatlantic dialogue – whether it is smooth sailing or rough waters. I would like to thank you very much for being with us today and for taking part in Atlantik-Brücke’s barbecue here in the Magnus-Haus garden. It is a privilege to have you as our guest of honor.

Ladies and Gentlemen, please allow me to give you a short overview of Ambassador Grenell’s remarkable track record.

Richard Grenell was born in Jenison, Michigan, in 1966. Without doubt it can be said that he is a young Ambassdor who brings plenty of energy and experiences from different sectors – the media, business and diplomacy. And I am confident that the transatlantic relationship will benefit from his experience, his pragmatism and his hands-on-approach. He started his career after having received a Master’s degree in Public Administration from Harvard University’s John F. Kennedy School of Government.

„I am confident that the transatlantic relationship will benefit from his experience, his pragmatism and his hands-on-approach.“

Early in his career, Ambassador Grenell became the spokesman for New York’s Governor George Pataki. From 2001 to 2008 he added diplomatic skills to his expertise on professional communication. During this period, Richard Grenell became the longest serving U.S. spokesman and political appointee at the United Nations in its history. President George W. Bush had appointed him to serve as Director of Communications and Public Diplomacy for the United States Ambassador to the United Nations. He advised four U.S. Ambassadors in total – amongst them the current National Security Advisor John Bolton.

Moreover, Ambassador Grenell was appointed as an Alternate Representative to the UN Security Council equipped with full voting rights in 2004. A couple of weeks ago he reflected on his time at the UN in a background conversation with journalists and said, and I quote: “You have to stay only one day at the United Nations to realize that Germany and the USA are on the same side.”

After his engagement at the UN the Ambassador founded his own company, the Los Angeles-based Capitol Media Partners. In 2012, he served as Presidential Candidate Mitt Romney’s National Security and Foreign Affairs Spokesman.

Richard Grenell is also well-known in the world of media and the sphere of journalism: He has written extensively for the Wall Street Journal, Politico and the Los Angeles Times. Apart from that he has contributed as a commentator on U.S. domestic and foreign policy on CBS News, CNN and Fox News.

And it has been reported to me that the Ambassador also actively communicates via Twitter – much like his boss in Washington.

Dear Richard, again – it is great to have you in Berlin as our new Ambassador, and we look forward to continuing our close partnership with the U.S. Embassy, a partnership that we have maintained and valued very highly for many years already. In this context we highly appreciate that you do not shy away from addressing difficult issues in our transatlantic discussions and that you tirelessly seek a constructive dialogue based on reason and good arguments. To my mind this is exactly the way Germans and Americans should interact as strong and reliable partners. We must not be afraid of controversial debates openly expressing our interests. And we should work together in a fair manner. Your unpretentious self portrait as a, I quote, “staffer kind of a guy” in a first conversation we had with you has intrigued us just as much as your topic-oriented attitude. Our goal is to solve problems that we have in common and rise to the challenges that we both face in an ever more complex globalized world.

„We must not be afraid of controversial debates openly expressing our interests. And we should work together in a fair manner.“

Let me touch upon just one of the top priorities on your political agenda for a moment. Of course, the transatlantic trade policy is one of your most important concerns. Let me be honest: A trade conflict between the United States and Europe benefits nobody. And a trade war that seems possible in these days would have disastrous consequences for our economies. However, one aspect of this conflict is also very clear: The European Union has the right to refuse to accept newly imposed punitive tariffs by the American government. Our counter reaction will always be moderate but unmistakable. In addition to this we will keep arguing on the basis of all relevant facts. When we analyze our mutual trade balances we have to not only look at trade in goods but also at service trade and at foreign direct investments to really get the full picture. From this perspective there is no deficit in America’s trade balance with Europe. The accusation of unfair European trading practices is simply not sustainable.

Simultaneously, Europe is always prepared and willing to negotiate about lowering or even eliminating tariffs. We should begin with our car industries. There is a lot of room for improvement. Maybe now is an appropriate opportunity to renew our negotiations of the Transatlantic Trade and Investment Partnership (TTIP). Our administrations should have concluded this Free Trade Agreement a long time ago. I can assure you that Atlantik-Brücke stays committed to constructively cooperate with the German federal government and the EU Commission on this issue.

„Europe is always prepared and willing to negotiate about lowering or even eliminating tariffs. We should begin with our car industries. There is a lot of room for improvement.“

Ultimately, Germany, the European Union and the United States still share the same fundamental values and interests, and both continents will benefit if we manage to work together closely. But we have to work hard every single day to maintain this transatlantic foundation.

Dear Ambassador Grenell, I have read that you regard Senator John McCain as a mentor. Coming to the conclusion of my remarks, I would like to quote extracts from Senator McCain’s forceful speech at the Munich Security Conference on the 17th of February in 2017 in which he analyzed what is at stake for the transatlantic alliance. John McCain said: “The unprecedented period of security and prosperity that we have enjoyed for the past seven decades did not happen by accident. It happened not only because of the appeal of our values, but because we backed them with our power and persevered in their defense. Our predecessors did not believe in the end of history – or that it bends, inevitably, toward justice. That is up to us. That requires our persistent, painstaking effort.”

In this spirit, I wish you a successful and fruitful diplomatic tenure in Germany. We are all looking forward to cooperating with you and the Embassy throughout the next years and to establish even tighter bonds between our nations. I am also very confident that you will enjoy your time here with your partner Matt Lashey. I wish you all the best for your time in Berlin, and I hope that your dog Lola will also appreciate living in our exciting capital.

Thank you very much!