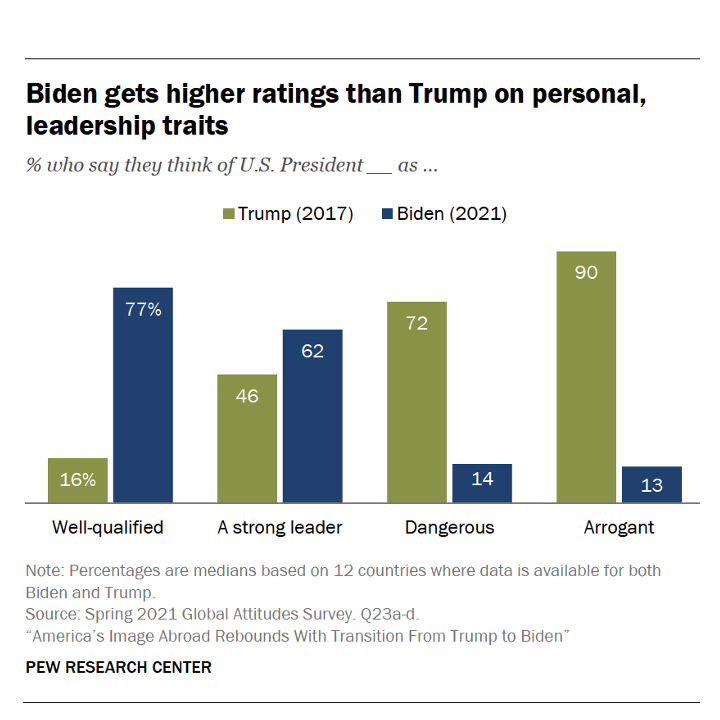 In Pew’s latest survey of America’s image abroad, you look at how the international perception of the United States has changed after the election of Joe Biden. Within the transatlantic community, there has certainly been a feeling of renewal and optimism after November 3. Has this feeling reached the broader publics in Europe and Asia that you surveyed? 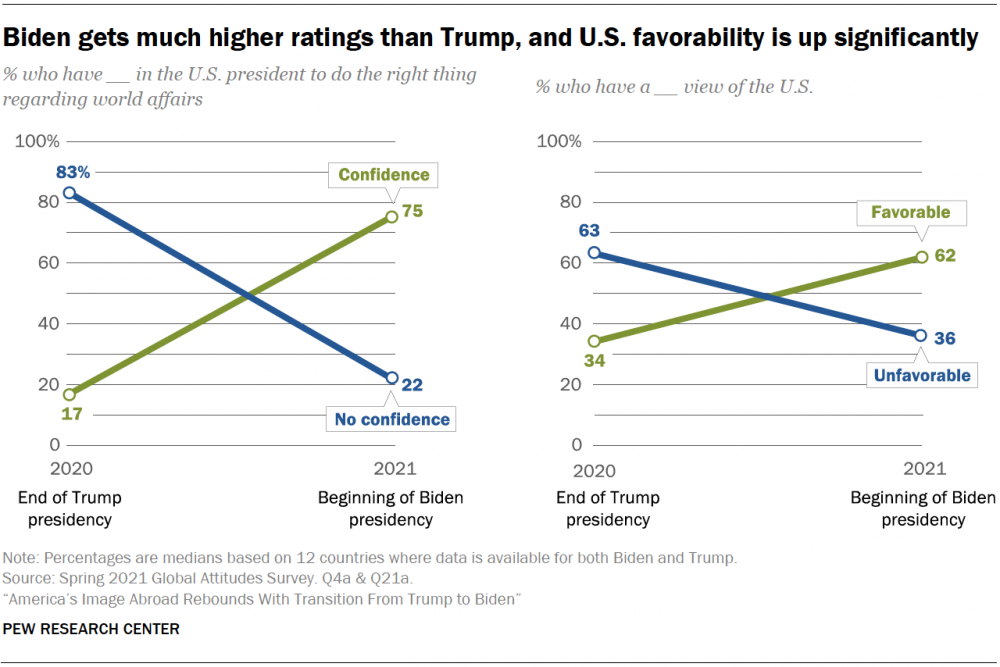 Richard Wike: This survey highlights a big change in how people in Europe and Asia view the United States, with attitudes turning much more positive. In fact, these are some of the largest shifts we’ve seen since we began surveying on this topic two decades ago. For example, if you look at 12 nations that we polled both in 2020 and this year, a median of just 17% across those nations had confidence in Trump last year, but 75% have confidence in Biden this year. The percentage across those 12 countries with a favorable view of the U.S. overall rose from 34% last year, when we saw all-time lows in many nations, to 62% in this survey. So there’s been a big change in how key allies and partners of the U.S. view who is in the White House, and that’s had a big impact on America’s overall image.

What, ultimately, is more important for Joe Biden’s positive rating in the international community – his policies or his personality? 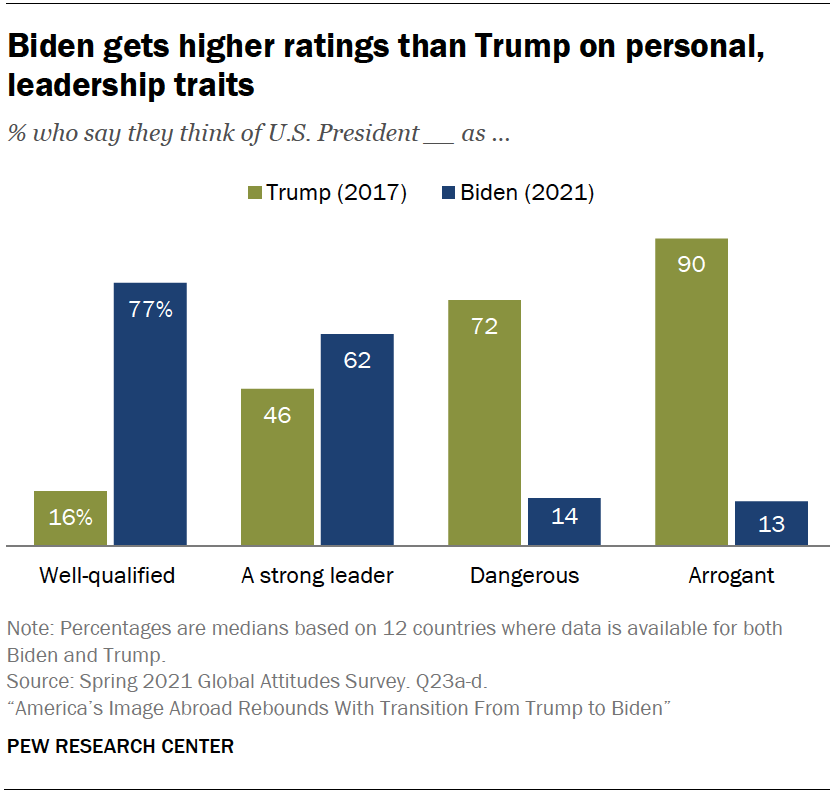 Both are important. Part of the approval is about personality and personal leadership characteristics. Not many people thought that Trump was well qualified for the job. They do tend to think that Biden is well qualified. The majorities typically thought that Trump was arrogant and dangerous, and not many people say that about Biden. Trump’s best trait according to our polling when he was in office was that he was a strong leader. But even there, Biden gets better ratings than Trump did. So, regarding leadership characteristics and personality characteristics, Biden does better than Trump. But beyond personality it’s also about policies. During the Trump presidency, there was a lot of opposition to his key policies, people did not approve of the US withdrawing from international commitments, they didn’t like the US putting a barrier between themselves and the rest of the world. People now welcome the turn to multilateralism that they see from the Biden administration. Climate is a good example. There was a lot of opposition to President Trump’s withdrawal from the Paris climate accord, and a huge majority say they approve of President Biden’s reentry into the Paris Agreement. Similarly, people welcome the US rejoining the WHO, they approve of Biden’s policy to allow more refugees into the United States. Overall, there is a much more positive view about the Biden administration’s policies so far compared to what we saw during the Trump years.

Would you consider the upward trend in America’s image abroad sustainable, even if Joe Biden, due to the close majorities in Congress, is not able to put all his policies into action?

There is always a certain reservoir of good will towards the United States, even during times when people are frustrated with the United States. But it also matters what the US does, whether it is able to deliver on its promises. Even in this survey with high ratings for President Biden, there are still concerns about America’s promises. There is a sense that the US doesn’t always act in a multilateral fashion. Majorities in every public that we surveyed said that they don’t think the US considers the interests of countries like theirs when it makes foreign policy decisions. That is a consistent finding that we’ve seen over the years, no matter whether it’s a Democrat or a Republican in the White House. There is a sense that the US does not always live up to its ideals or listen to other countries.

You show that a similar uptick in Western European’s trust in the US President happened when President Obama was elected. Are we seeing the very same trend today as 12 years ago, or are different factors at play? 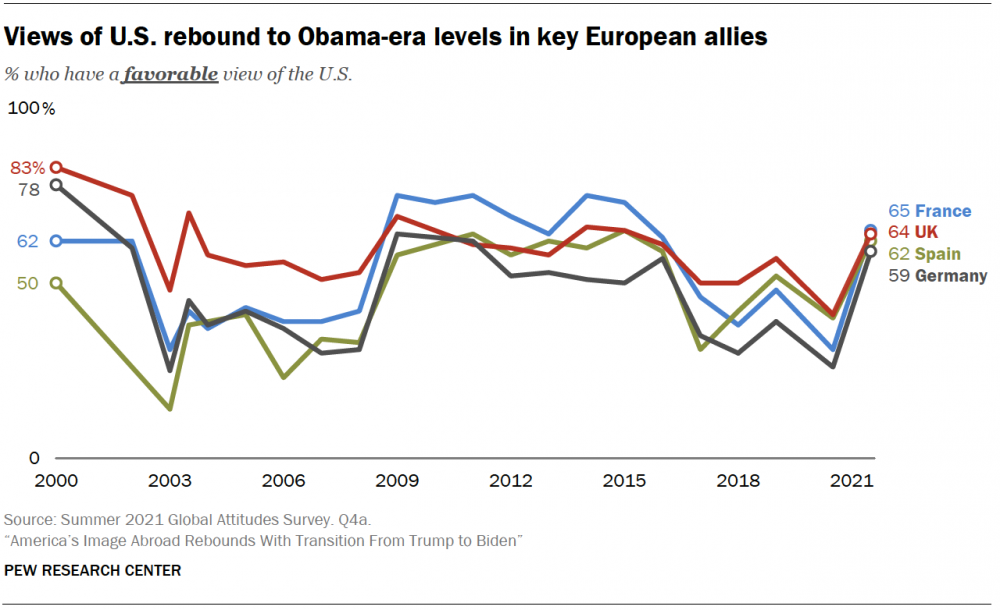 There are some similarities between the rebound in America’s image today and what we saw in 2009 after President Obama had come into office: in both cases, people reacted positively to a more multilateral approach to foreign policy compared to the predecessor. It is important to note that although Obama was pretty popular overall, there were certain policies that people did not like during the Obama years, as well. What has changed since then is that the world has changed in many ways. The rise of China has changed the geopolitical environment in which an American president is operating. The pandemic has changed the world, and there has been a continued economic anxiety in many countries. So despite the similarities in numbers, it is important to note that Joe Biden is inheriting a world that has changed since the Obama years.

With the significant shifts in global dynamics that you described, what are the major differences you are seeing between the perception of the United States among publics in Europe and those in the Asia-Pacific region?

We do a lot of polling on views about China. A couple of things that are interesting have come out of that in recent years. One is that people very much see China’s power on the rise. And the other is that views towards China have turned negative in many of the countries where we do our surveys. 2020 in many ways was a low point in America’s image. There was a widespread perception that the US mishandled the pandemic and that, among some other things, led to record lows in ratings for the US. At the same time, there were also record lows for China in many countries. That was driven by concern about how China handled the pandemic, in some cases concerns about China in the security realm, in others China as an economic partner. So both superpowers, the United States and China, have been seen in an increasingly negative light over the past couple of years. The US’ image has now rebounded, and we will have some new numbers on China, soon.

How has the political divide in the United States and especially the events of January 6th of this year influenced the international community’s view? Has America’s image and credibility as a world leader been compromised by this development? 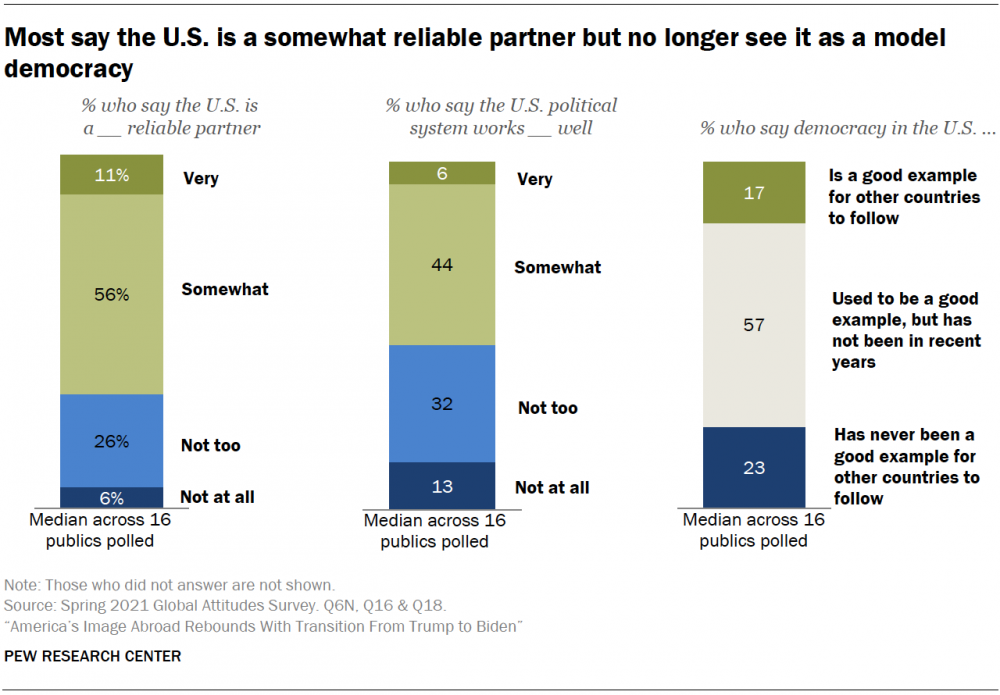 Later this year, we’ll release more survey results on views of the U.S., with a particular focus on how people see various elements of American soft power. And soon we will also release a report updating many of our key trends on attitudes toward China.